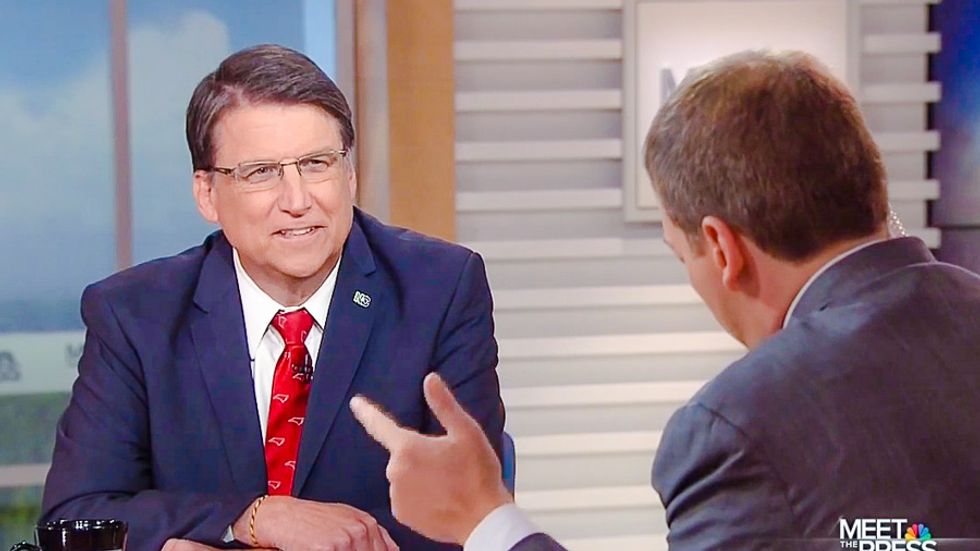 On Sunday's edition of Meet the Press, host Chuck Todd asked the governor if he regretted signing HB2 after 160 companies called for it to be repealed, and dozens threatened to boycott the state.

McCrory argued that his job as governor was to stop "government overreach" by cities like Charlotte, which had passed an ordinance allowing transgender people to use the restroom of their choice.

"It was the left that brought about the bathroom bill, not the right," he insisted. "The city of Charlotte passed a mandate on every private sector employer in North Carolina, one of the largest cities in the United States of America. And I think that's government overreach."

"You talk about overreach," Todd interrupted. "You say Charlotte overreached. How did the state of North Carolina, the state government not overreach in just the same way?"

"This has been a long debate in the city of Charlotte, this is where they came down," the Meet the Press host pointed out. "You guys debated for like 10 seconds."

"We've got to have more dialogue and not threats," McCory said, adding that there was a "disconnect" between "corporate suites and main street."

"That's a very thoughtful thing for you to say about dialogue," Todd shot back. "Where was the dialogue?"

According to McCrory, the legislature felt that it needed to act fast to stymie Charlotte's ordinance because "once it came into effect, it would be harder to overturn."

The governor admitted that he did not meet with transgender people before signing the law, but complained that the Human Rights Council was "more powerful than the NRA."

"Which makes me want to overturn [Citizens United] because I don't know who their donors are," he quipped. "They are putting on a lot of pressure instead of having good dialogue."