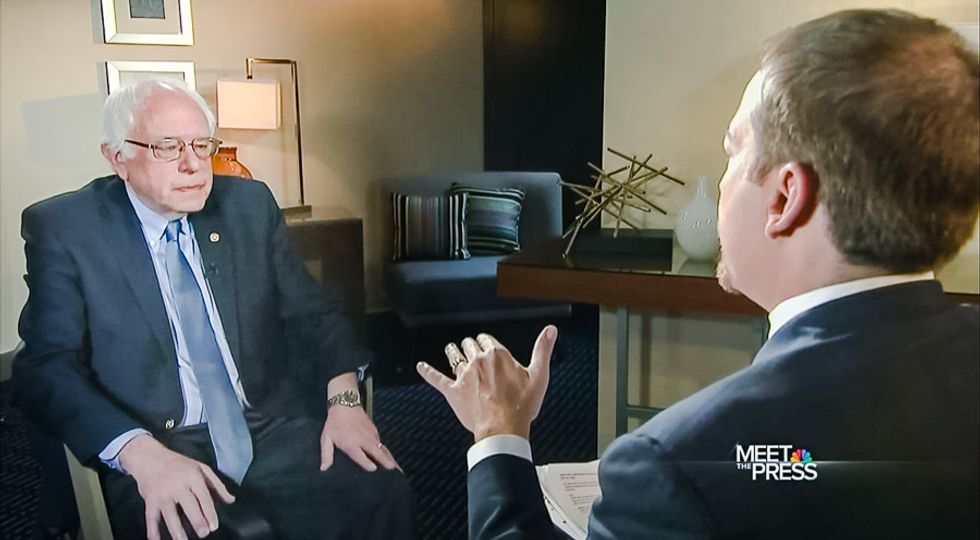 NBC host Chuck Todd speculated over the weekend that he may have conducted his last interview with Bernie Sanders as a presidential candidate.

In an interview that aired on Sunday's edition of Meet the Press, Sanders admitted that he had a narrow path to defeating former Secretary of State Hillary Clinton.

"At the end of the day, you feel like you were giving a fair shot to this nomination?" Todd wondered.

The NBC host pointed out that 16 of the 17 states with the highest levels of income inequality had voted for Clinton in primaries even though it had been the top issue for Sanders' campaign.

"[If] Donald Trump is the nominee, do you have a responsibility to do what it takes to get your voters to support Hillary Clinton?" Todd asked.

"I will do everything that I can to make certain that Donald Trump is not elected president," Sanders insisted. "But if that scenario plays out, the major responsibility will be on Secretary Clinton to convince all people -- not just my supporters -- that she is the kind of president this country needs to represent working people in this country, to take on the big money interests who have so much power."

"I think she's going to have to be very explicit about supporting a program that stands up for the needs of the middle class and working families," the Vermont senator added. "Which most importantly makes it clear that she is prepared to take on Wall Street in a very clear way, take on the billionaire class, come up for a program that makes health care for all in this country a right within the next several years."

Sanders conciliatory comments left Todd wondering if he had mentally conceded the race.

"Did we just hear, intentionally or not, the Bernie Sanders exit interview?" Todd concluded.

Watch the video below from NBC's Meet the Press, broadcast April 24, 2016.

Former President Donald Trump famously remarked that if he randomly shot people on 5th Avenue in Midtown Manhattan, his devotees would still support him. Although Trump never shot anyone on 5 h Avenue, he has been impeached by the U.S. House of Representatives for encouraging a violent insurrection in Washington, D.C. on January 6 — and his Republican devotees are still defending him. Most GOP senators appear unlikely to vote "guilty" in Trump's forthcoming impeachment trial, and conservative San Diego-based attorney Chris Truax tears their arguments to pieces in an article published on January 28 by the conservative website The Bulwark.