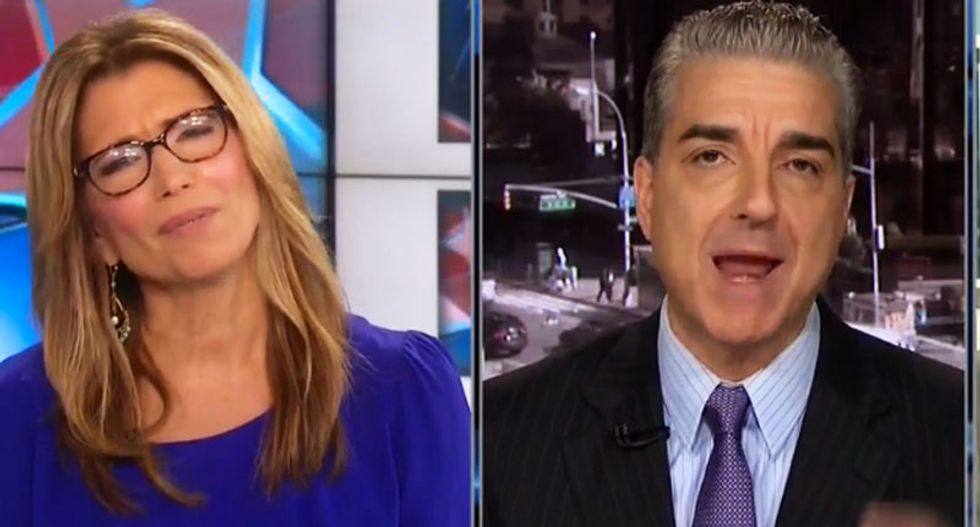 A CNN host brought proceedings to a quick halt Tuesday morning when a conservative guest went on a rant about Hillary Clinton -- including her participation in a 1975 child abuse court case.

Appearing on CNN with host Carol Costello, Trump supporter and Newsmax host Steve Malzberg, attempted to turn the tables on a discussion over Trump's anti-woman rhetoric by going after Clinton and her husband.

“When you get one-on-one, -- especially if it’s Hillary -- Donald Trump will go places nobody is willing to go, where the media at this point isn’t willing to go," Malzberg excitedly said. "Bringing up Clinton’s women who say they were intimidated by Hillary. Having them come forward and speak. A litany of issues that you can’t even imagine.”

“Do you know how many young women in this country don’t even know that Bill Clinton was impeached? No. Maybe they’ve heard of Monica Lewinsky. They don’t know the women that have accused Bill Clinton of sexual improprieties and that say they have been threatened and intimidated by Hillary Clinton,” Malzberg continued.

“A girl who was raped by a pedophile that Hillary Clinton bragged about getting off,” Malzberg began to say before Costello interrupted, saying, “Oh, come on.”

“What do you mean? You don’t want to hear it? That Hillary Clinton is on tape bragging about, as a lawyer getting off on a technicality. That woman now says, ‘Hillary ruined my life.’ That’s not fair,” Malzberg stated.

Costello shut the discussion down, saying:  “I’m going to leave it there, and goodbye. Thanks for joining me.”

Writing in her memoir, Living History, Clinton stated that she was two years out of law school and that a criminal court judge appointed her to the case. She said she “couldn’t very well refuse the judge’s request.”

She wrote, that she "didn't feel comfortable," but knew that, as an attorney, she had "an ethical and legal obligation to defend him to the fullest extent of the law."

Clinton said that her experience in the case led  her to help set up Arkansas' first rape hotline.