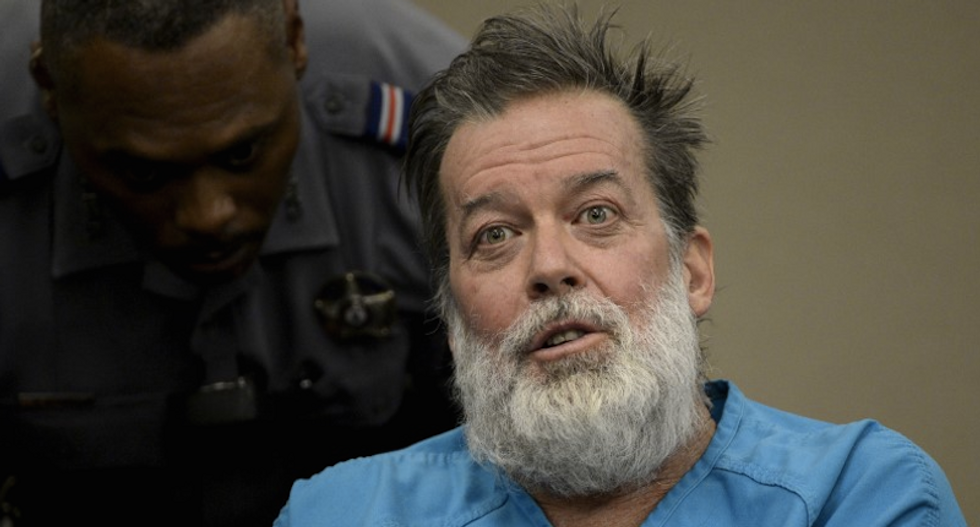 A deputy tries to calm Robert Lewis Dear, 57, accused of shooting three people to death and wounding nine others at a Planned Parenthood clinic in Colorado, as he spoke out at his hearing to face 179 counts of various criminal charges at an El Paso County court in Colorado Springs, Colorado December 9, 2015. (REUTERS/Andy Cross/Pool/Files)

A man accused of fatally shooting three people and wounding nine others at a Planned Parenthood clinic in Colorado last year is set to return to court on Thursday for a hearing to determine if he is mentally competent enough to fire his lawyers.

Robert Lewis Dear, 58, has said he wants to represent himself against multiple charges of murder and attempted murder, after previously declaring he was guilty and calling himself a "warrior for the babies" at a hearing in December.

Those attorneys have since said in court papers that evaluators concluded Dear was mentally incompetent, but it is up to Martinez to rule whether the case can proceed and if Dear can represent himself.

If the judge rules Dear is mentally unfit, the case will be suspended while he undergoes treatment at the state mental hospital until he is restored to competency.

Dear has been held without bond at the El Paso County jail since he surrendered on Nov. 27 at the Planned Parenthood clinic in Colorado Springs following a five-hour siege in which three people were killed, including a police officer, and nine others suffered gunshot wounds. It marked the first deadly attack on a U.S. abortion provider since 2009.

Dear, who police said was armed with several rifles and opened fire in the parking lot of the clinic before storming the building, told detectives after his arrest that he was upset with Planned Parenthood for performing abortions and what he said was the "selling of body parts," the documents showed.

Among those scheduled to testify at Thursday's hearing include a detective who interviewed Dear after his arrest and at least one of the mental health evaluators who examined Dear, a onetime self-employed art dealer who lived in Hartsel, Colorado.

District Attorney Dan May said he would not announce whether he would seek the death penalty until some time after Dear formally enters a plea.