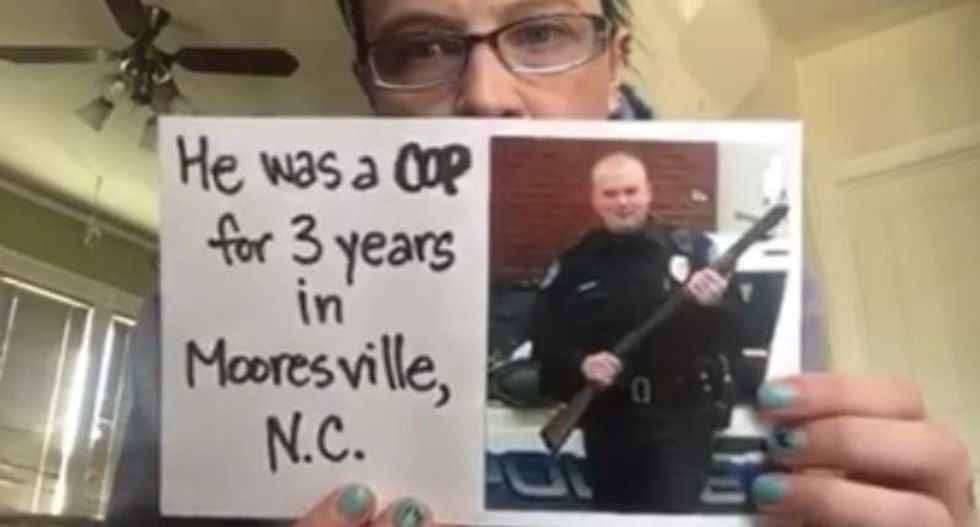 A 34-year-old Colorado woman has drawn widespread attention online after posting a Facebook video exposing her daughter's sexual abuse by her ex-husband, a former police officer.

"He got 90 days -- we got life," Catherine St. Germain told KUSA-TV regarding the abuse by Aaron Scott. Scott served 90 days in jail in connection with the attack and was recently released.

Set to an acoustic version of the Beatles song "Yesterday," the video shows St. Germain displaying note cards detailing her relationship with Scott -- a single parent like her who was an officer in North Carolina as well as a Navy veteran -- leading up to her marrying him in June 2014.

In April 2015, she explains, police in Loveland, Colorado contacted her and said that Scott had assaulted her daughter Alyssa, who was 15 at the time.

"I IMMEDIATELY kicked him out," one note card explains. "Our divorce was final Sept. 1, 2015. He maintained his innocence until the DNA evidence came back POSITIVE. Only then did he accept a plea bargain."

Scott agreed to 8 years' probation on top of the 90-day jail sentence. According to St. Germain, the mothers of Scott's two children were not told about his conviction.

"'Stranger Danger' is a joke," she says in another notecard. "MONSTERS look and act NORMAL."

The video has been shared more than 78,000 times since being posted on Facebook last Friday.

"I keep saying I didn't do anything brave my kid did. My kid did the bravest thing," St. Germain told KUSA. "She spoke out against the person who sexually assaulted her within 24 hours."

Watch KUSA's report on the video, as aired on Tuesday, below.

The video itself can be seen here.