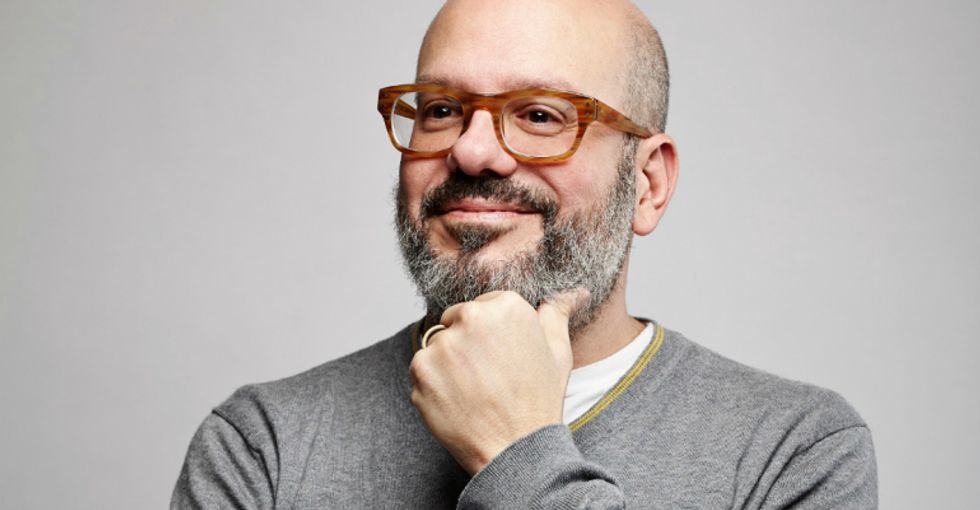 David Cross doesn’t hold back as he describes the popularity of Donald Trump – and the possibility that he will win the Republican nomination for president.

“At least 25% of America has always been ignorant, racist, xenophobic and backwards, people prone to demagoguery. That’s not a surprise,” he says. “The surprise is that there’s this loud, brash, arrogant narcissist giving these people a voice and making them feel proud.”

By now you will have gathered that Cross, a standup comedian and actor best known for playing Tobias Funke in Arrested Development , is not one to mince his words. Over 25 years, his standup has evolved into biting, uncompromising commentary – entirely befitting for a man who credits the 2004 re-election of the “craven and crass” George W Bush as the catalyst for his move to the left.

In a brilliant standup set from early 2012 called Shut Up, You Fucking Baby! Cross eviscerates Bush for his actions post-9/11, calling him “the same fucking moron that he was on the 10th.”

“The war on terrorism is a fucking joke,” Cross rails, gloriously. “You cannot win a war on terrorism. It’s like having a war on jealousy. It’s an absurd notion. At no point in time are we ever going to go ‘Got ‘em all. Everyone loves us again!’ All we’re doing is making more terrorists. Every day, we make brand new terrorists all over the world – because people fucking hate us again … The rest of the world hates us – understandably.”

While the sinister stupidity of the Bush White House is now plain for all to see, Cross could see it mere months after 9/11 – and was commendably shouting it from the rooftops when most American commentators were either saying nothing or voicing their unease quietly.

In a recent interview with Rolling Stone, Cross lambasted Trump – and it is a theme to which he is more than happy to return. “Take heart, UK. At least 150 million people in this country are horrified that Donald Trump and Ted Cruz are doing as well as they are. But rest assured that Trump will never be president. There isn’t a single solitary doubt in my mind that Hillary will be the next president.”

Not that Cross is entirely enthused by that prospect. “For the record, I’m supporting Sanders,” he says, earnestly. “While there’s so much broken about America, there’s a feeling that it’s not going to be fixed with Hillary or Ted Cruz there. America is such a starkly divided country – it’s always this divided, but the obnoxious, loud, bloviating nature of Donald Trump makes the divide seem starker. But it’s always been there – and it’s pretty gross.”

If it sounds as if he has been taking an almost anthropological interest in America, it’s because he has been, albeit as an indirect consequence of his biggest ever standup tour (that next month he’ll bring to the UK). Traversing the US, Cross has been visiting corners of America he’d never have visited otherwise and re-examining a love-hate relationship with his homeland.

Wherever Cross goes, he courts controversy. Born in Atlanta to an American mother and father from Yorkshire, his early standup contemporaries included Louis CK and Janeane Garofalo, while his first job in TV was as a writer on the Ben Stiller Show. Perhaps because of his heritage, Cross has long been fond of the UK. When asked about the current attacks on British public service broadcasting, his answer is considered: “I can easily see the importance of the BBC and the people who are trying to de-fund it are mostly Tories. Without knowing the specifics, I would say that I’m clearly not on their side.”

As engaging and articulate as he is on politics, it was for comedic purposes that we tracked him down in Florida. The Increasingly Poor Decisions of Todd Margaret, which he created, writes on and stars in, is back for its third series and is making the smorgasbord of TV comedy currently on offer just that little odder. The story of a hapless, hopeless American office temp transported to the UK where, as a fish-out-of-water, he brings upon himself various calamities – including finding himself in the Houses of Parliament as an MP is found mysteriously dead, then being on trial for his life. Whether you view Todd Margaret as a demented caper or something more profound and Kafkaesque, it’s certainly funny.

“He’s not a bad guy,” Cross says of Todd. “But he’s one of the dumbest characters ever created, I’m sure. But he’s well-meaning and he tells lies because he thinks his fabrications are more appealing than his reality – that’s where the cringe factor comes. He has opportunity after opportunity to come clean to this woman Alice, who is clearly attracted to him, but he doesn’t, so things spiral out of control.”

Alice is played by Sharon Horgan, whose company Merman produces the show. “David will quite happily trade surreal banter with you for as long as you can supply it back,” she says. “But for all his silliness, he is a precise, exacting creator. He can adapt to any working environment except a lazy or half-arsed one.” High praise indeed from a supremely talented writer and performer at the top of her own game.

But lest you think Cross is just a liberal darling, he disagrees: “One of the worst shows I’ve ever done was in Northampton, Massachusetts, a bastion of liberal values. Some progressives don’t have a sense of humour: they just hear inflammatory words then react emotionally. I have a higher energy, a more fun set in more conservative places. Because the people coming to see me are surrounded by mostly right-wing conservatives – and I’m giving a voice to things they’ve been thinking.”