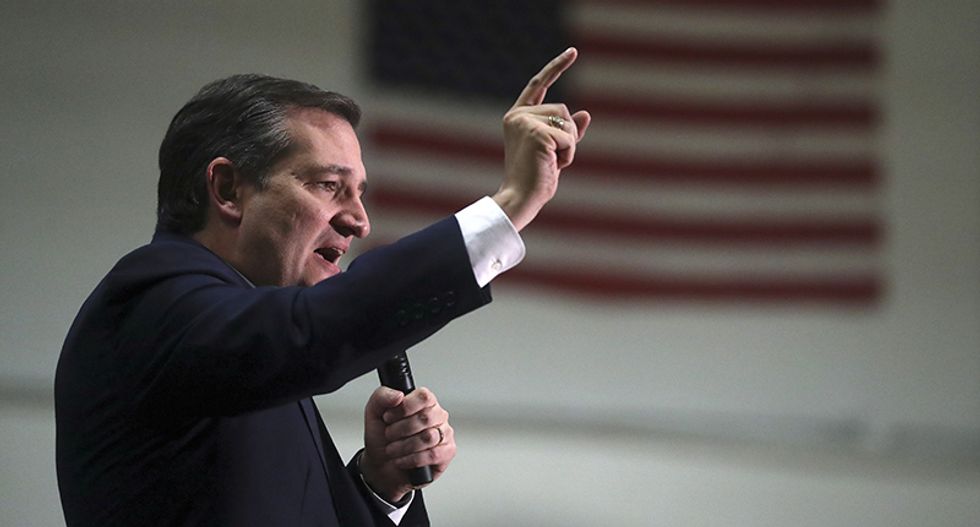 A senior adviser to Republican presidential candidate Ted Cruz on Sunday accused rival Donald Trump's campaign of taking a "banana republic approach" by complaining that party rules for selecting a nominee are rigged against him.

Former Virginia Attorney General Ken Cuccinelli, the Texas senator's delegate operations manager, said on ABC's "This Week" that the Trump campaign is challenging the delegate selection process "because they're getting beat on the ground."

Trump remains the front-runner in the race to be the Republican Party's candidate in November's general election. But it remains unclear whether the billionaire businessman will arrive at the party's July 18-21 convention in Cleveland with the 1,237-delegate majority needed to clinch the nomination on the first ballot.

The next big face-off is New York state's primary on Tuesday, with 95 delegates at stake.

Opinion polls show Trump, a New Yorker, well ahead of his rivals, with Kasich and Cruz trailing behind.

The latest CBS News poll, released on Sunday, showed Trump ahead in New York, with 54 percent of those surveyed to 21 percent for Cruz and 19 percent for Kasich.

On the Democratic side, Hillary Clinton, a former New York senator and U.S. secretary of state, and U.S. Senator Bernie Sanders of Vermont will also face New York voters on Tuesday. Polls show Clinton is still favored to win, although Sanders, a New York City native who is hoping for an upset win to ensure the continued viability of his campaign, has managed to narrow the gap in recent days.

Trump, meanwhile, has become increasingly agitated as the Cruz campaign outmaneuvers him in the complex art of securing delegates that are not simply allocated by a popular vote.

At a news conference in New York City's Staten Island borough on Sunday, he repeated his assertion that the system was "crooked."

"You're basically buying these people," he said, referring to convention delegates.

"I could put them in the best planes and bring them to the best places in the world," he added. But he said he was not interested in wooing delegates that way, describing it as undemocratic.

The party rules for picking delegates vary by state.

Cuccinelli said Cruz has been "winning elections. And when we win, Trump whines."

"This is a banana republic approach from the Trump team," he said. "... They have a media campaign. But Ted Cruz has built a grassroots campaign."

On "Fox News Sunday," Trump's Lewandowski pointed to Florida, where the candidate won the primary in a landslide. But Trump can count on the support of only 69 of the state's 99 delegates because the state Republican Party chairman is allowed to appoint 30.

"Ted Cruz does well in places where party bosses get to set those rules and people don't get to go and vote," Lewandowski said.

But in several interviews on Sunday, Republican National Committee Chairman Reince Priebus again denied that the delegate selection rules are rigged against Trump.

Kasich ridiculed Trump and his campaign for suggesting the delegate selection rules are fixed and that a "dirty trick" allowed Cruz to win Colorado's nominating contest without a statewide vote.

Kasich, interviewed by CNN, said Trump should "act like you're a professional. Be a pro."