Cruz clashes with Hannity: Not my fault if Trump's campaign can't 'run a lemonade stand' 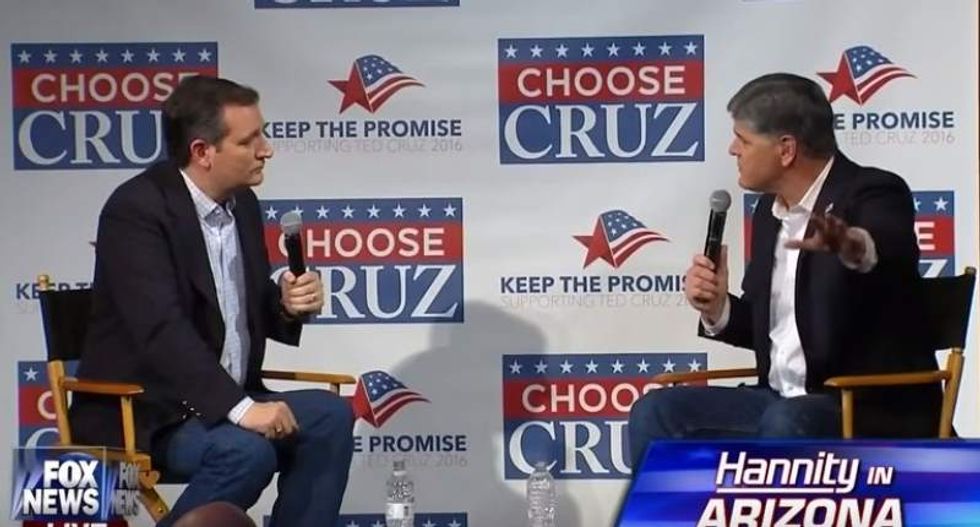 A question about accruing delegates set off an argument between Sen. Ted Cruz (R-TX) and Sean Hannity on the conservative host's radio show on Tuesday.

"I cannot help that the Donald Trump campaign doesn't seem capable of running a lemonade stand," Cruz told Hannity. "Elections are won by voters and grassroots activists showing up and voting for the candidate they support, and we are winning election after election after election. And nobody, as I travel the country, nobody is asking me this other than the Trumpsters and people repeating it."

The clash began early on during the talk, when Hannity asked the Tea Party legislator and Republican presidential candidate to explain the "very extensive" process of talking to delegates on the part of his campaign.

Cruz immediately griped that the media was "obsessed" with the process, instead of voters. Hannity countered by arguing that his listeners and fans online were coming to him for answers.

"I am telling you that people are telling me that they find this whole process confusing," Hannity insisted, noting reports that despite finishing third in the Georgia GOP primary last month, his campaign was able to convince enough voters in state congressional district conventions last weekend to increase his delegate count.

"It's more than a process question -- it's an integrity of the election question," he said. "Everybody's asking me this question."

When Cruz said only "hardcore" Trump supporters were asking about the process, Hannity shot back, "You gotta stop. Every time I have you on the air and I ask a legitimate question, you try to throw this in my face. I'm getting sick of it."

Listen to the interview, as posted online, below.