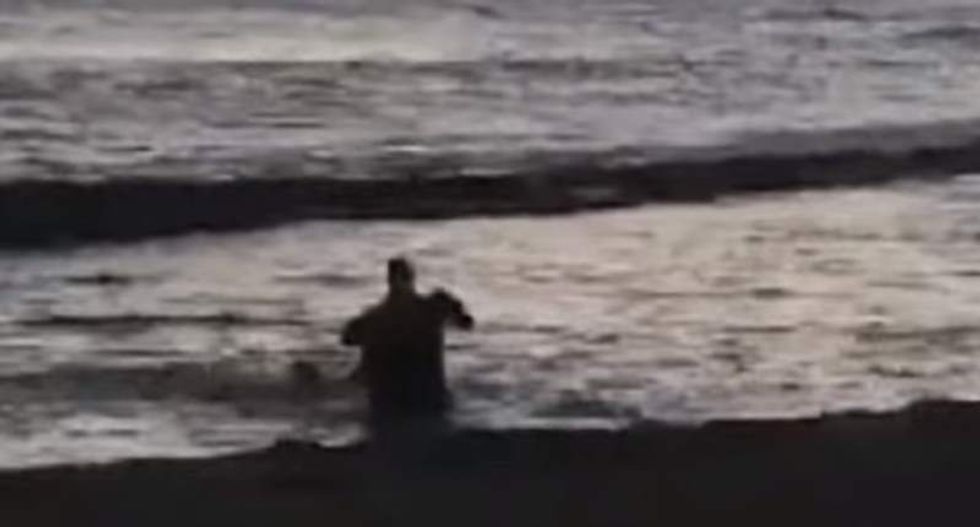 Footage taken on the island of Kauai shows an unidentified man repeatedly hitting the seal, who officials say was disturbed by the assault but not injured

A man was caught on tape attacking a pregnant, endangered monk seal on a beach in Hawaii, sparking widespread outrage and prompting federal authorities to launch a search for the suspect.

The alarming footage taken Tuesday night at Salt Pond Beach on the island of Kauai shows an unidentified man repeatedly hitting the seal, who officials say was disturbed by the assault but not injured.

“She’s a large seal, 600-plus pounds,” said Jamie Thomton, a Kauai marine mammal response coordinator with the National Oceanic and Atmospheric Administration. “She’s a survivor ... An assault by a man is something she can handle.”

The monk seal, identified by officials as RK-30, is the largest in the area and is very beloved in a community that is dedicated to the protection of the endangered species, Thomton said.

The seal species, native to Hawaii and not found anywhere else in the world, is one of the most endangered marine mammals on the planet, with officials estimating that there are only 1,060 total seals left.

As of Thursday, a joint federal and state investigation to identify and track down the suspect was still under way. There are state and federal laws that protect monk seals and endangered animals, and the man in the video could potentially face a fine of up to $50,000 and five years behind bars, according to Thomton.

These kinds of attacks on monk seals are not common, Thomton said, though there are occasional harassment incidents, and over the past decade or so there have been a small handful of killings by humans.

The seals are also very tough and often face tiger shark predators and occasionally fight with each other, Thomton said.

RK-30 is identifiable by scars from boat strikes, a neck entanglement and shark attacks, Thomton added. He said the seal is at least 17 years old and appears to be eight to 10 months pregnant.

“She was disturbed and agitated, but not enough to leave the area,” he added. “She’s completely unharmed and acting completely normal.”

The incident sparked outrage across Hawaii and a statement of sympathy from Kauai mayor Bernard Carvalho.

“I share our community’s shock and disappointment as this behavior is both unacceptable and illegal,” he said. “They deserve our respect and protection, and our gratitude goes out to the bystanders who immediately contacted authorities.”

Thomton said the video and the subsequent outrage on social media have provided an opportunity to educate the public about the endangered species. “The most important thing we’ve learned from this is that there is overwhelming support for monk seals and the coexistence with monk seals on the beach,” he said. “It highlights that we don’t accept this kind of treatment.”

Watch a report on the investigation, as aired on KHON-TV, below.