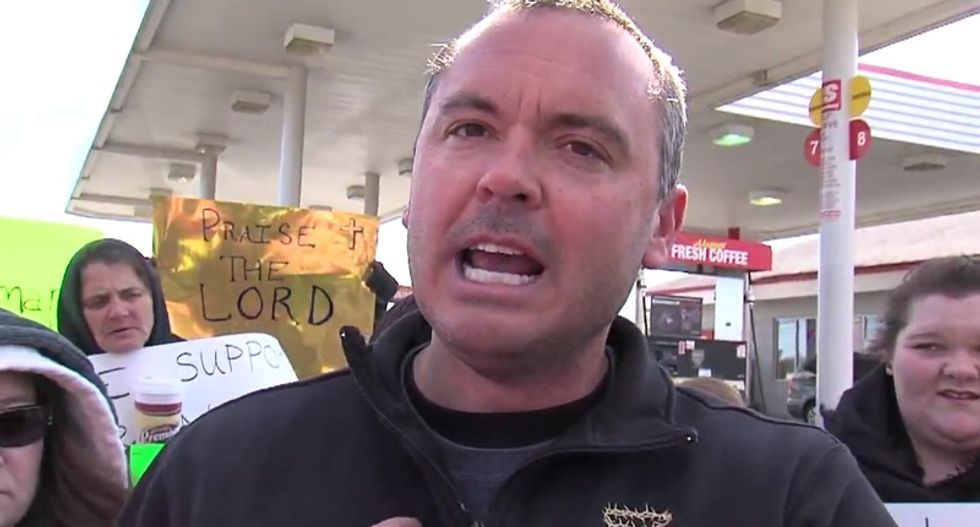 An Indiana state trooper who was fired for proselytizing people he pulled over during traffic stops spoke out an Saturday and said he accepts his firing because he is a "soldier for Jesus Christ."

Surrounded by praying supporters, Hamilton, who was fired on Thursday, said his responsibility as a Christian superseded those of his job, ABC6 reports.

"I always said after I got saved, I work for the state, but ultimately I'm a soldier for Jesus Christ," Hamilton said, as supporter said "Amen" in the background. "And God has used that job for the last three years... and that was to spread the word and tell people when they're hurting, the truth."

He then said that while he believes the United States is a great country, "it's on its way down."

"We just came out here to street preach, and hopefully we'll see souls saved today," he said. "And I'll be honored to glorify the Lord Jesus Christ."

When the ABC6 reporter pointed out that his faith cost him his job, Hamilton responded, "It cost Christ everything," and added "God's law" is above "man's law."

Hamilton was fired after 14 years on the job after a woman filed a complaint in January that led to a lawsuit by the ACLU. In September 2014, Hamilton was issued a written warning against preaching while on the job. He was ultimately fired for violating that warning.

"While all of us – citizen and police officer - enjoy the right to freedom of religion and freedom of speech, there are appropriate and proper restrictions placed on agents of the State related to their actions while engaged in their official duties," Indiana State Police Superintendent Doug Carter told the station in a written statement. "While I respect Mr. Hamilton’s religious views I am also charged to respect every citizen’s rights and the best way forward for the citizens of Indiana, and for Mr. Hamilton, was to end his employment as a state police officer."

Watch the report, from ABC6, here: