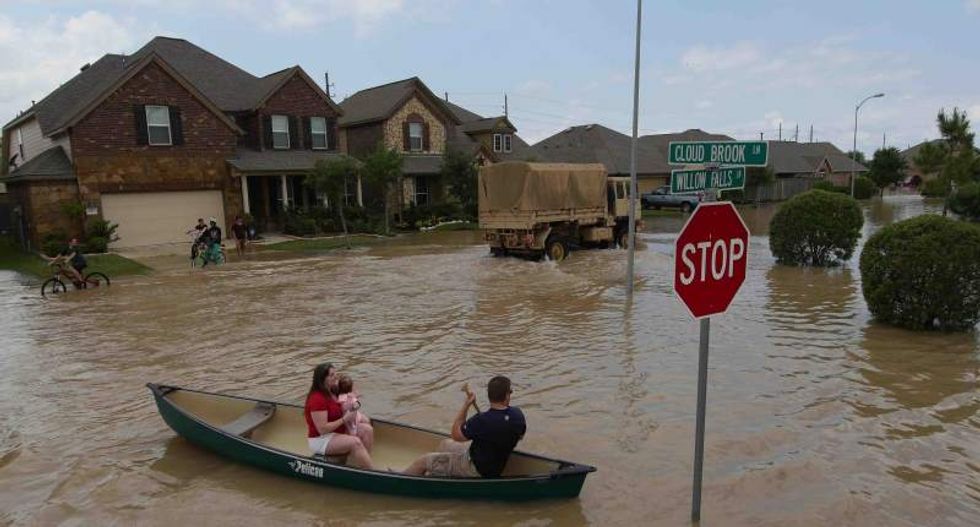 A woman holds a baby in a canoe as Texas Guardsmen arrive to assist after flooding in Brookshire, Texas, on April 20, 2016. (US Army National Guard/1st Lt. Zachary West/Handout via Reuters)

A grandmother and four of her grandchildren were killed in floods in Texas caused by a storm system that unleashed tornadoes, damaging hail and torrential rains on several central U.S. states, officials said on Saturday.

The flood victims in Palestine, Texas, 100 miles (160 km)southeast of Dallas, escaped a house where flood waters had reached the roof line and were then swept away by the rushing waters, Palestine police Captain James Muniz said.

"They were able to get out but they were washed away," he said, adding their bodies were recovered on Saturday. The grandmother was aged 64 and the children between six and nine.

The National Weather Service issued a severe thunderstorm watch on Saturday extending from the Houston area, where floods this month have killed eight people, into much of Louisiana. It has also issued a flash flood watch extending from Texas into western Tennessee.

"Strong to severe thunderstorms are expected today into this evening across the lower Mississippi Valley, Tennessee Valley, Ozarks and the Ohio Valley," it said on Saturday.

There were seven reported tornadoes from the storm system on Friday in Texas and Oklahoma, it said. A twister caused damage to several structures in Ninnekah, about 50 miles southwest of Oklahoma City, local news reports said.