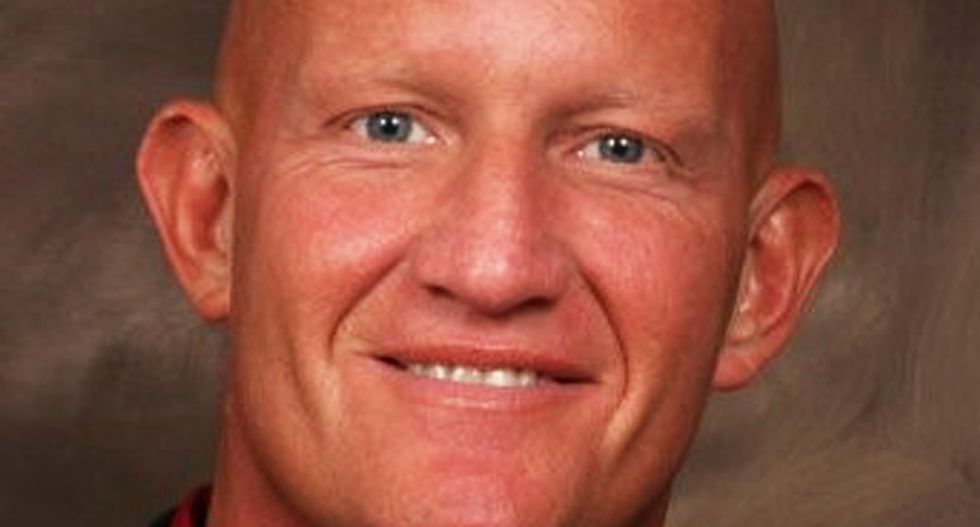 A Florida school district is under fire for allowing a pastor who leads prayers with sports teams at the schools, to roam freely in and out of locker rooms, proselytizing students and then stalking them on Facebook where he gives them tips on sex and their lifestyles.

According to The Friendly Atheist, David Gaskill of the Fellowship of Christian Athletes is being allowed access to students by the School District of Hillsborough County where he not only leads teams in prayer but also accosts them in school parking lots and takes selfies with shirtless athletes which he posts on his personal Facebook page.

In testimony that Gaskill gives to congregations, he explained that he found Jesus while in jail on seven felony counts, admitting that his drug addiction was so bad  he was buying cocaine by "the kilo."

The Freedom From Religion Foundation has compiled extensive documentation of Gaskill's contacts with students --most of which he has since deleted from Facebook -- saying he is "behaving like a religious predator seeking out vulnerable prey."

In a letter to the school district, the FFRF wrote, "It is clear that Gaskill has unlimited access to preach, pray, and proselytize to student-athletes whenever he desires. He is involved with every sport at multiple schools within HCPS. He shows up, sometimes invited by coaches but often on his own, at team events, including practices and games, and he is allowed to be in the dugout or on the field with the players at these events. He has the same level of access as a coach even though he has no affiliation with the school."

The FFRF also documented photos from Gaskill's Facebook page where he shows minors posing with him and bragging about discussing, "God’s rules on sex."

In another instance "a coach gave Gaskill personal information about a student (a death in the family)" which Gaskill then shared online.

Gaskill also "also follows students’ lives on social media, commenting on their lives…: "one of my players was living with his girlfriend in his girlfriend’s mother’s house…'" claims the FFRF.

The FFRF has called for the school district to ban the self-styled sports pastor from contact with students.