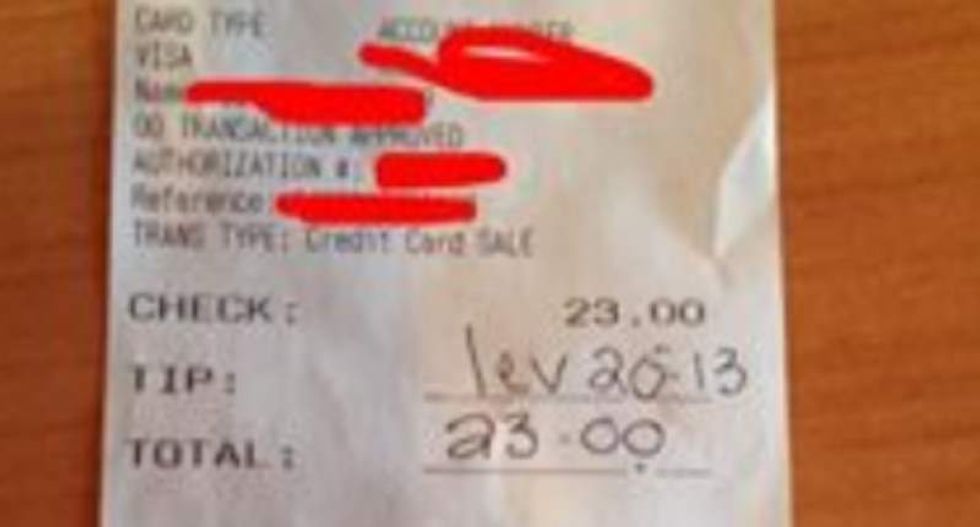 This receipt left for Alexandra Judd shows the lack of a tip, replaced by an abbreviation for a Biblical verse. (WBTV-TV)

A gay waitress in North Carolina shared a bill revealing what she described as a hateful message a group of diners recently left her instead of a tip.

"I've heard of people leaving fake money, or writing funny stuff in the tip spot of a check," Alexandra Judd told WBTV-TV. "But [I] never believed it would happen to me, in the way that it did."

Judd posted a picture online of the bill from the group's visit to her Charlotte restaurant on Tuesday. The photo shows an abbreviation for the Old Testament verse Leviticus 20:13 listed under "tip." It states, "If a man also lie with mankind, as he lieth with a woman, both of them have committed an abomination. They shall surely be put to death; their blood shall be upon them."

The bottom of the bill also shows the message, "Praying for you" written in under the diners' signature. She told WBTV that the group was "very rude" to her during their visit.

Judd, who has joined in rallies criticizing the passage of HB2 -- which bans trans residents from using restrooms according to their gender identity -- responded by writing, "I don't care what anyone says, this is the most disrespectful thing you can do," she wrote about the incident on Facebook. "Don't pray for me darling, I have everything I could possibly want and need in my life."