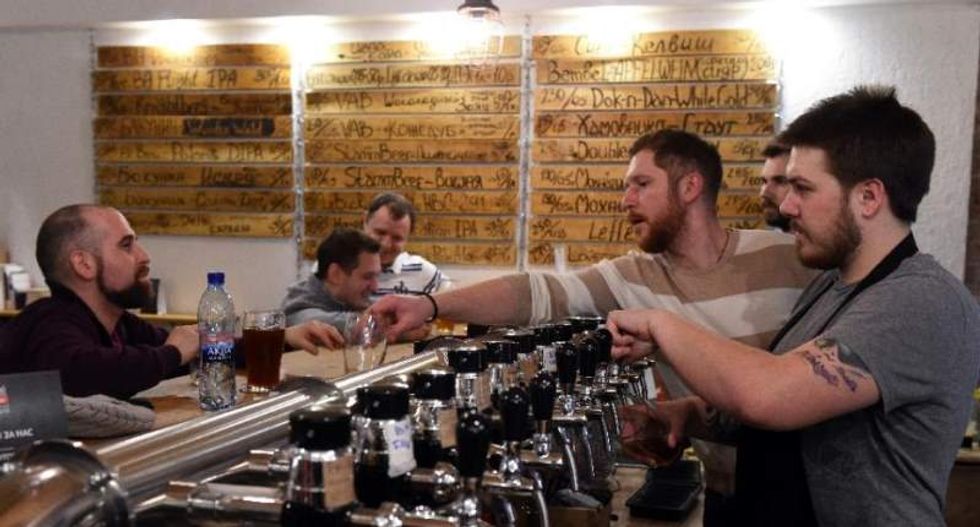 While the craft beer revolution swept North America and Western Europe years ago, Russia is now catching up at a time when it is trying to shrug off a vodka-swilling reputation. (AFP/Vasily Maximov)

While the craft beer revolution swept North America and Western Europe years ago, Russia is now catching up at a time when it is trying to shrug off a vodka-swilling reputation.

"We are tired of Russia being perceived as a country of alcoholics," Pavel, a customer at Beer Garden told AFP as he relaxed after work.

Renowned for their hard-drinking habits, Russians in recent years have started cutting down on booze as the government has tightened controls to curb rampant alcoholism.

Last year, the average Russian drank some 11.5 litres of pure alcohol, down from 13.5 litres in 2014, according to a health ministry official.

The beer market has seen overall consumption fall -- but while the big brands have suffered -- niche producers have started flourishing as drinkers' tastes have got increasingly sophisticated.

"There are already more than 1,000 microbreweries" in Russia, she added.

"These are microbreweries, young Russians who learned how to make good-quality beer from YouTube videos," Stopichev said of his suppliers as he poured a pint of Jaws Lager, brewed in the city of Yekaterinburg in the Urals.

Nestled in a maze of abandoned factories outside Moscow, Green Street Brewery is one of the many such establishments fuelling the craft beer boom.

Brewer Maxim Boroda and a group of friends make some 800 litres of beer every month at Green Street, which they rent once a month to bypass the administrative procedures required for the owners of alcohol-producing facilities.

Part of the reason for the craft beer boom is that production and sales often fall into a legal loophole -- with pubs that only serve beer for instance allowed to work without a liquor license.

"We're in a grey zone. What we are doing is neither legal nor illegal," Boroda said.

"Getting permission to make our own alcohol is very difficult. We are forced to rent this brewery to hide behind its owners."

Facing a rapidly-evolving beer market -- which remains dominated by Baltika, owned by Danish brewer Carlsberg -- the Russian government has adopted a laissez-faire approach to the craft beer industry.

But the state's current absence in the business could hurt its development, she said, since the currently vague legislation could suddenly toughen up and make brewers bankrupt.

"Brewers fear they could go out of business," she added.

Petrova also warned that the proliferation of the craft beer label -- which beer-makers have liberally slapped onto new products -- could ultimately undermine real craft beer producers.

For those who have led the revolution in craft beers, however, there is little fear that it will be derailed.

"We will soon change our country's image," said brewer Boroda, inhaling the fumes emanating from a stainless steel tank.

"And even vodka-lovers won't be able to resist."