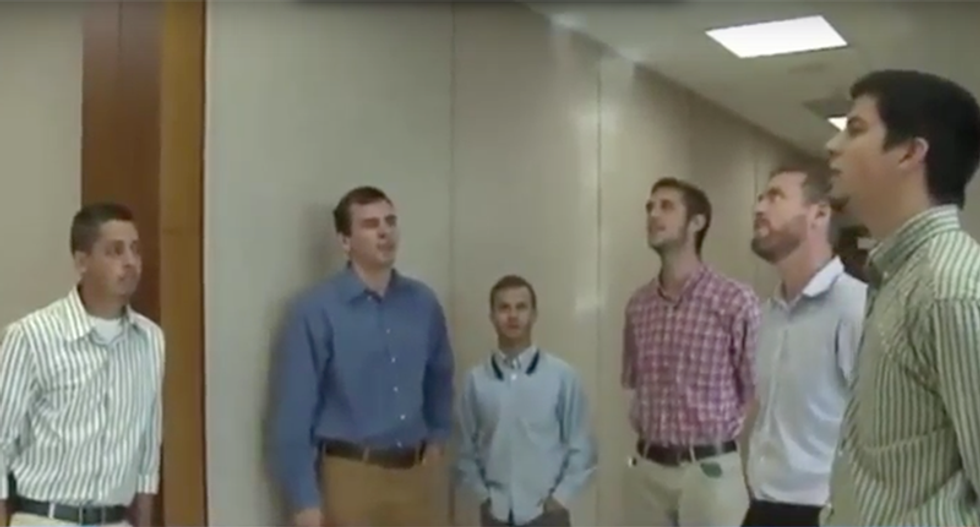 Members of a controversial East Texas church seem to have taken the idea of a Crusade a little too literally. Church "elder" Jacob Gardner, 27, was one of six men charged after an incident last year at Lakewood Church made famous by Pastor Joel Osteen.

Gardner believes that his church in Wells, Texas are practicing the true form of Christianity while others, such as those at Lakewood Church, are not. “All throughout the centuries Christianity was persecuted,” Gardner told KPRC 2 News in Houston. “All I need to do is step outside and be a Christian and I’ll be persecuted.”

Gardner thinks that God is compelling him and the members of his church to warn the world of an impending judgment day. His "brothers" stand with him including Richard Trudeau and Mark DeRouville who were arrested last month for disrupting services at a Baptist church in the New York town of Saranac Lake.

They were arrested a second time when the two spotted a pregnant woman in the neighboring town of Alto. When they learned she was unmarried they “started telling her that she was living in sin and would burn in the pits of hell if she did not repent," according to the police report.

Gardner defended the men's need to heckle other churches by claiming they are simply preaching about God’s love and “lifting up their voices,” not screaming or attacking anyone. Gardner also rejects any claims made by the pregnant woman that they were harassing her because “the members of our church have never spoken like that and will never speak like that.”

But those two are not the only members who have had run-ins with the law. Church member Taylor Clifton was arrested after causing a disruption during the annual Christmas parade in Lufkin, a town just southeast of Wells.

“I lifted up my Bible, just kind of lifted it up to the sky and started quoting some scripture and already there was just like this violent reaction from this woman,” Clifton explained. He "ignored officers," according to the police report and "continued yelling at parade attendees." Officers also noted that they feared for Clifton's safety as well as the safety of the parade-goers, many of whom were frightened children.

“The Lord told me it wasn’t His will to stop preaching and they were threatening to arrest me if I continued preaching the Gospel,” said Clifton. “So I chose to obey God rather than man, by God’s grace.” He told KPRC 2 News that the parade was finished by the time he started scaring people. He also swears he was merely quoting scripture and "preaching" and believes his First Amendment Rights to diss Santa Claus was violated by his arrest.

“The reason these officers arrest us, the reason why these judges judge us, is because they can,” Gardner said. “We’re just sheep to the slaughter.” He believes jail time is something that is inevitable and all persecuted Christians will and must face.

“If the devil can't pick us off through discouragement, personal discouragement, then he will finally resort to invading the very infrastructure of the justice system,” Gardner said.

ABC News covered The Church of Wells in 2014 after a young woman left home to join the church and her parents were concerned for her well-being. The camera crew follows the desperate parents as they search the streets for a daughter they say they've only seen on the church's YouTube videos. Nightline attempted to get some of the church "elders" to answer the criticisms against the church, but they were ignored. One father whose son Brett joined the church described it as being like a death in the family because he simply disappeared.

In February, a small group tricked Church of Wells members into joining them to preach on a street corner. Their goal was to capture footage of the church members claiming that salvation is only attainable by attending their church and that only they can determine if someone is saved or not. Characteristics a man in the video says defines them as a cult.