How cults exploit one of our most basic psychological urges 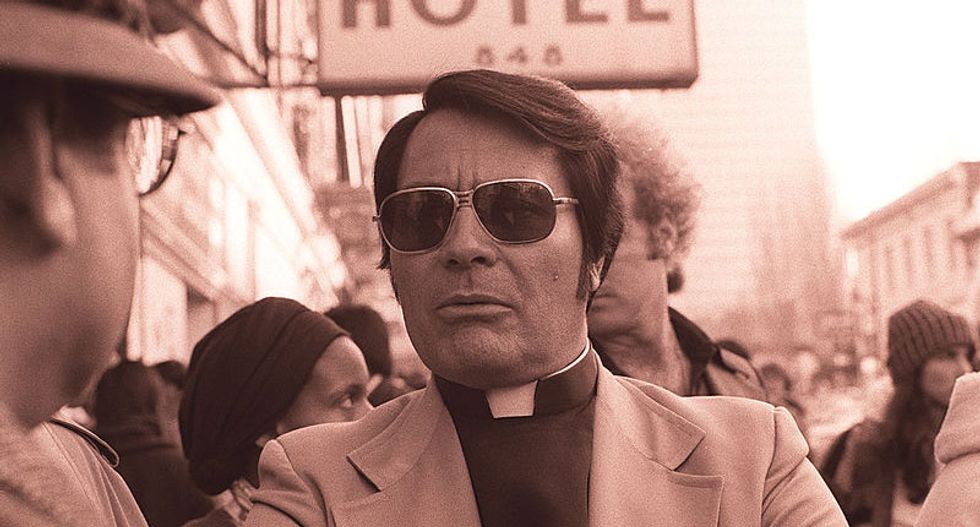 Reverend Jim Jones at a protest in front of the International Hotel, 848 Kearny Street in San Francisco in 1977 (Photo by Nancy Wong)

The new Hulu TV series “The Path” – described by Time as the streaming service’s “best show yet” – centers on a cult-like faith, Meyerism, whose adherents seek fulfillment under the guidance of their leader, Cal.

As pure entertainment, the show seems promising. But as someone who studies human cognition and why people believe scientifically dubious claims, I’m more interested in the real-life versions of Cal – specifically, the needs that leaders of cult-like faiths tap into that make them so attractive to certain people.

The illusion of comfort

An answer to this question can take a variety of forms. One that has gotten a considerable amount of attention over the years is the emotional comfort cults can provide.

California Institute of Technology psychologist Jon-Patrik Pedersen, in attempting to explain why people are drawn to cults, has argued that the human desire for comfort, in the face of fear and uncertainty, leads us to seek outlets that can soothe our anxieties.

In and of itself, the urge to quiet internal demons is not a negative trait. I’d argue that, to the contrary, it’s an effective adaptation that allows us to cope with the stressors, big and small, that bombard us on a regular basis.

However, cult leaders meet this need by making promises that are virtually unattainable – and not typically found anywhere else in society. This, according Pedersen, could include “complete financial security, constant peace of mind, perfect health, and eternal life.”

Beyond exploiting human desire for emotional comfort, cult leaders don’t always have the best intentions when it comes to the mental health of their followers.

Psychiatrist Mark Banschick has pointed out that cult leaders employ mind and behavioral control techniques that are focused on severing followers' connections to the outside world.

These methods can actually deepen members' existing emotional insecurities, while encouraging them to become completely reliant on their cult for all their physical and emotional needs. At the same time, they’re often told to sever ties with any friends or relatives who are not part of the group.

This can result in physical and psychological isolation, which actually exacerbates many of the problems, like anxiety and depression, that attracted people to the cult in the first place.

The anxiety and depression can become so overwhelming and feel so insurmountable that the followers feel trapped.

It’s a vicious cycle that can lead to truly tragic consequences, such as the well-documented 1978 Jonestown Massacre, when over 900 people died in a mass murder-suicide carried out under the supervision of cult leader Jim Jones. Then there were the Heaven’s Gate suicides in 1997, when 39 individuals, including cult leader Marshall Applewhite, willingly overdosed on phenobarbital and vodka in the hope of being transported to an alleged alien spaceship flying behind the (real) Hale-Bopp comet.

The case for reason

So just how can one face his or her fears, but avoid the potential danger of cult-like groups?

In a word: rationality.

Seeking reason-based solutions for emotion-focused conditions is by no means a new concept. Unfortunately, rationality is not as intuitively appealing as remedies that simply exploit sentimental cravings.

Sigmund Freud, in his 1927 text “The Future of an Illusion,” argued that religion was a mere mental trick constructed to comfort believers and help them overcome insecurities – even though their acceptance of dogma was irrational. While Freud’s position was focused on mainstream faiths, his highlighting of the emotional comfort central to them is analogous to the role that this element plays in cults.

His solution? Replace religion (or, in the present case, cults) with rational guides for living that deal with problems directly. Are you anxious about your appearance? Eat healthy and exercise regularly. Stressed about relationship problems? Talk directly to your partner in a clear and honest manner to arrive at mutually agreed-upon resolutions.

One could certainly argue that Freud, by highlighting religion’s negative elements, was ignoring the potential positive outcomes correlated with spirituality such as stable relationships, moral grounding and life satisfaction.

But there is no denying that emotions can cloud judgment and result in poor decisions.

For example, Gerd Gigerenzer, a German psychologist who studies decision-making, illustrated the very real consequences of favoring an emotional response over a more data-driven one. In his 2004 analysis of highway fatalities in the wake of the September 2001 terrorist attacks, he pointed out how people became afraid of flying in the immediate aftermath of the attacks. Many who still needed to travel ended up driving instead of flying in order to reach their destinations.

However, this influx of cars on the road led to approximately 350 more people dying in automobile accidents from October to December of 2001. As Gigerenzer noted, these deaths could likely have been avoided “if the public were better informed about psychological reactions to catastrophic events.”

It’s not easy to simply “use reason over emotion.” The fact that cults continue to exist – and that people continue to play the lottery despite the minuscule chance of winning, or insist on subjecting themselves to unproven cancer treatments such as urine therapy – is a testament to the potency of emotions as behavioral motivators.

Furthermore, this should not be taken as a directive to surrender our emotions, which can enhance human experiences in many ways.

But it’s important to be vigilant, and recognize the value of approaching decisions using logic, especially when emotion-driven choices can lead to negative, life-altering outcomes.

Which of these paths will Cal and his Meyerists pursue? My guess is emotions will win the day. In the fictional world of television, that’s OK.

But for those of us viewing their exploits from our living rooms, perhaps it’s an opportunity to think about our choices, and whether or not our feelings had the final say.