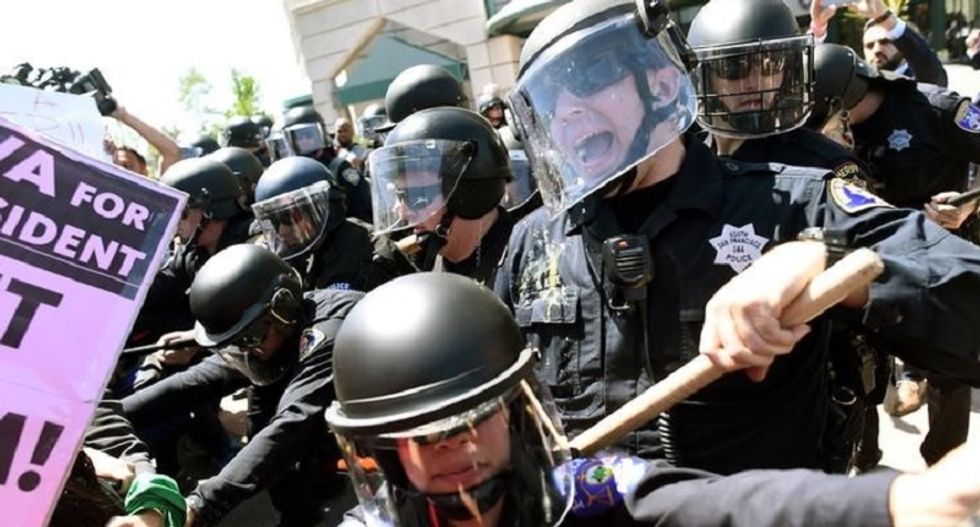 Police in riot gear hold back demonstrators against U.S. Republican presidential candidate Donald Trump outside the Hyatt hotel where Trump is set to speak at the California GOP convention in Burlingame, California, U.S., April 29, 2016. REUTERS/Noah Berger

Protests erupted on Friday outside the venue where U.S. presidential candidate Donald Trump was speaking to a group of California Republicans, a day after a demonstration against the former reality TV star turned ugly.

About 300 people gathered outside the convention in Burlingame, south of San Francisco. Protesters, who held signs and Mexican flags, at one point rushed security gates, and police officers had their batons out.

News cameras caught images of Trump, guarded by security officials, hopping a barrier and walking toward a back entrance of the hotel for his speech to the California Republican convention. Protesters were blocking traffic.

"That was not the easiest entrance I've ever made," Trump told the gathering. "It felt like I was crossing the border actually."

Trump has won a following among Republican voters in the United States, along with ardent critics, for his hardline stand on illegal immigration. He has accused Mexico of sending drug dealers and rapists across the U.S. border, and promised to end it by building a wall and making Mexico pay for it.

Chaotic scenes broke out on Thursday outside a Trump rally at the county fair grounds in Costa Mesa, California. Media reported that anti-Trump protesters smashed the window of a police patrol car and blocked traffic. Some 20 people were arrested.

The Republican front-runner was in the state ahead of its June 7 primary, when the most convention delegates of the Republican nominating cycle will be at stake.

Trump's rivals hope to block the real estate mogul from garnering the 1,237 delegates needed to secure the nomination. U.S. Senator Ted Cruz on Friday picked up the backing of Governor Mike Pence of Indiana, the next state to hold a nominating contest.

Trump, who described himself this week as the party's presumptive nominee, would take a huge stride toward knocking his Republican rivals out of the presidential race if he wins the Indiana primary next week.

Protests have become common outside rallies for Trump. His campaign had to cancel a rally in Chicago last month after clashes between his supporters and protesters.

Cheryl McDonald, 71, of Discovery Bay, said she had to pass through protesters to get inside the hotel where his event was being held on Friday. “They were yelling. I think the only words they know in the dictionary are profanity," said McDonald, who said she is a Trump supporter.

Cruz won backing from Indiana's governor on Friday ahead of the state's primary, where the Texan is fighting a rearguard battle to damage Trump's chances of winning the nomination.

"I'm not against anybody, but I will be voting for Ted Cruz in the upcoming Republican primary," Pence said on an Indiana radio show.

Cruz, a U.S. Senator from Texas, is trailing the New York billionaire in the Midwestern state after losing to him by a wide margin in all five Northeastern states that held nominating contests on Tuesday.

The endorsement from Pence could boost Cruz's hopes of winning Indiana on Tuesday. A CBS poll out earlier this week found Trump with about 40 percent of support in Indiana, compared to 35 percent for Cruz. The poll had a margin of error of 6.6 points. Other polls have also shown Trump ahead.

(Reporting by Doina Chiacu and Timothy Ahmann in Washington and Brendan O'Brien in Milwaukee; Writing by Emily Stephenson; Editing by Richard Valdmanis and Alistair Bell)