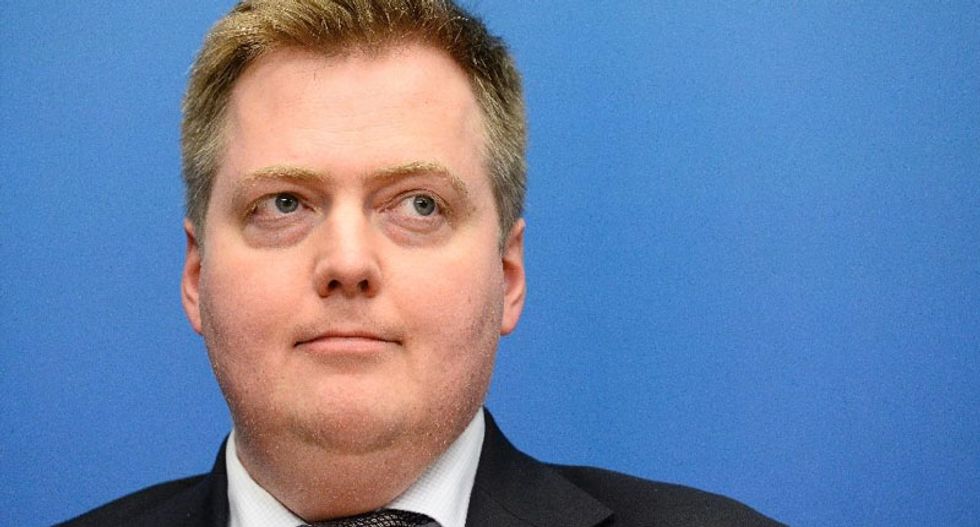 Financial records published by the International Consortium of Investigative Journalists showed that Gunnlaugsson, 41, and his wife Anna Sigurlaug Palsdottir bought the offshore company Wintris Inc. in the British Virgin Islands in December 2007.

The company was intended to manage Palsdottir's inheritance from her businessman father, the amount of which has not been disclosed.

Gunnlaugsson transferred his 50-percent stake to his wife at the end of 2009, for the symbolic sum of one dollar.

But when he was elected a member of parliament for the first time in April 2009 as a member of the centre-right Progressive Party, he neglected to mention the stake in his declaration of shareholdings.

Gunnlaugsson has insisted he never hid any money abroad, and says his wife paid all her taxes on the company in Iceland.

He has denounced the release of the documents leaked from a Panama-based law firm, calling it a witch hunt against him and his wife.

"She (Palsdottir) has been adamant about paying taxes on it (Wintris) to Icelandic society rather than saving money by paying taxes abroad.

"She has neither utilised tax havens nor can you say that her company is an offshore company," Gunnlaugsson said on his website on Monday.

It was unclear whether Gunnlaugsson was guilty of tax evasion but his opponents have insisted he step down regardless.

More than 25,000 Icelanders have signed a petition demanding his resignation.

The opposition has said it will propose a vote of no confidence in parliament, likely to be held this week.

Gunnlaugsson, who promised full transparency when he became premier in 2013, has been in the hot seat since his wife acknowledged the existence of her offshore company in mid-March, before the "Panama Papers" leaks.

In an interview with Swedish public broadcaster SVT recorded last month, excepts of which were aired in Iceland on Sunday, Gunnlaugsson became visibly upset after being repeatedly asked about his wife's company, eventually storming out of the room.

"It's like you are accusing me of something," he declared.

A spokesperson for the prime minister told SVT that the couple had fully respected Icelandic law and declared all income and property since 2008.

Despite media requests, his tax records have not yet been publicly released.

A demonstration calling for Gunnlaugsson's resignation was to be held Monday evening in Reykjavik.

"People should not have a prime minister they are ashamed of... The prime minister displayed his lack of faith in the Icelandic currency and economy by placing his money in a tax haven," said Sigurdardottir, the former prime minister.