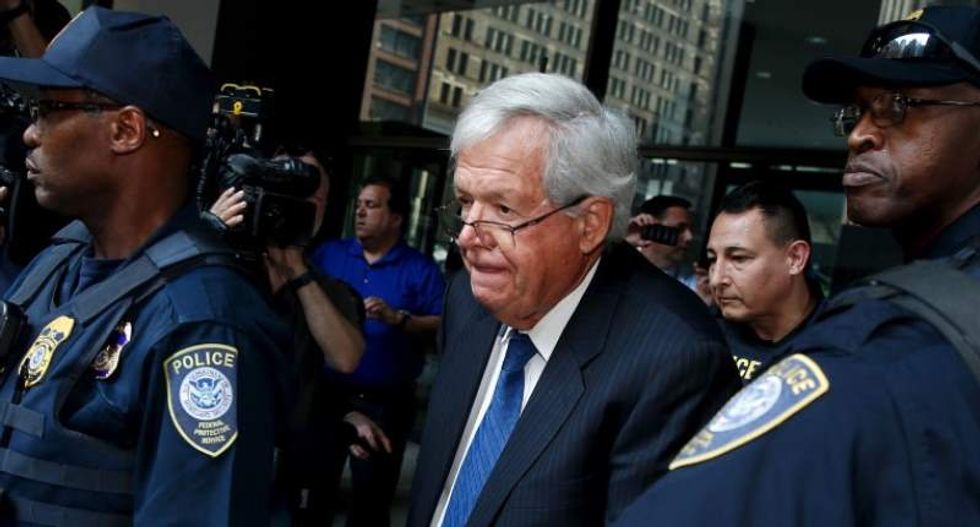 Former U.S. House Speaker Dennis Hastert is surrounded by officers as he leaves federal court after pleading not guilty to federal charges of trying to hide large cash transactions and lying to the FBI in Chicago, Illinois, United States, June 9, 2015. (Reuters/Jim Young)

A man who accused former U.S. House Speaker Dennis Hastert of sexual abuse filed a lawsuit on Monday claiming the once powerful conservative politician owes him $1.8 million as a part of an agreement between them to compensate him for decades of pain and suffering.

The plaintiff, identified as James Doe, filed the lawsuit in Kendall County Circuit Court in northeastern Illinois, claiming Hastert owes him the unpaid portion of a $3.5 million deal they verbally agreed to in 2008.

Doe said he was 14 when he was molested by Hastert, a trusted family friend, high school teacher and "beloved coach" of the state champion wrestling team in the town of Yorkville, Illinois.

Hastert, 74, pleaded guilty in October to a federal charge in Chicago federal court of "structuring" for evading bank reporting rules by withdrawing large amounts of cash in small increments. He was taking out the funds to make payments to a man identified in court documents by federal prosecutors as Individual A.

Hastert is scheduled to be sentenced on Wednesday for the financial crime, and faces up to five years in prison although prosecutors have recommended a maximum of six months. Another Hastert accuser known as Individual D, and the sister of another accuser, who is deceased, are expected to testify at the sentencing hearing.

Hastert's attorney, Thomas Green, had no comment on the lawsuit, a spokeswoman said in an email.

Court documents in Hastert's trial revealed that he was accused of abusing five boys in the 1960s and 1970s, decades before he became one of the country's most powerful politicians.

Doe's lawsuit claims Hastert sexually molested and abused him in a motel room while they were on a trip to a wrestling camp.

"For many years to follow, Plaintiff (Doe) suffered severe panic attacks which lead to periods of unemployment, career changes, bouts of depression, hospitalization, and psychiatric long-term treatment," the lawsuit said.

Hastert admitted in his plea deal that he paid $1.7 million in cash, from June 2010 to December 2014, to someone he had known for decades to compensate for past misconduct.

Doe said in his lawsuit that he confronted Hastert in 2008 after learning that Hastert had sexually abused another person. Doe suggested $3.5 million when Hastert asked him how much would compensate him. Hastert agreed to pay the amount and asked for Doe to keep the agreement quiet, the lawsuit said.

(Reporting by Justin Madden in Chicago; Editing by Alexia Garamfalvi)