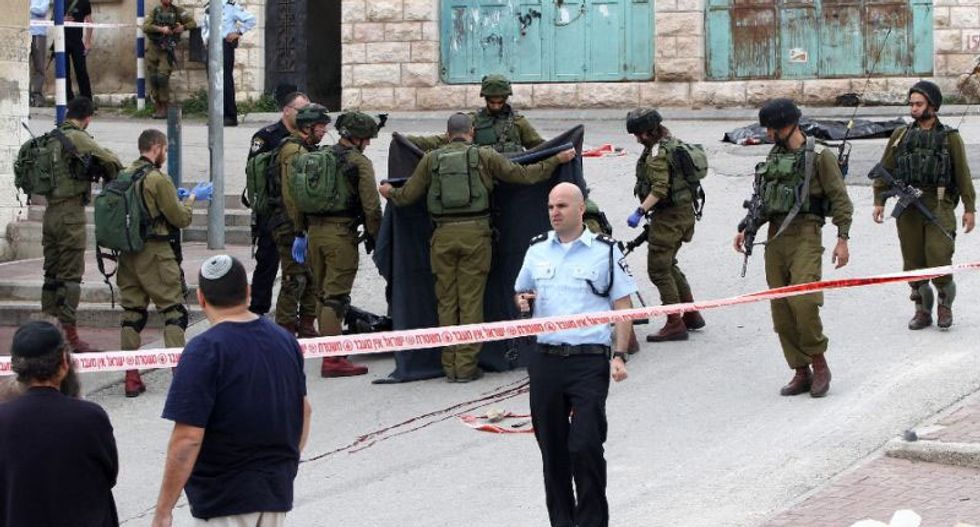 Troops cover the body of a Palestinian assailant who was allegedly shot in the head by an Israeli soldier as he lay wounded on the ground in Hebron on March 24, 2016 (AFP Photo/Hazem Bader)

An Israeli soldier caught on video shooting a wounded Palestinian assailant in the head was charged with manslaughter on Monday in a case that has sparked widespread controversy.

Prosecutors presented the indictment to a military court over the March 24 killing, which occurred minutes after the Palestinian had stabbed another soldier and lay prone on the ground wounded by gunfire, according to Israeli authorities.

"The accused violated the rules of engagement without operational justification as the terrorist was lying on the ground wounded and represented no immediate threat for the accused or others who were present," a copy of the indictment said.

"By his acts, the accused unlawfully caused the death of the terrorist Abdul Sharif."

The 19-year-old soldier's identity has remained secret under a gag order.

Video of the incident in Hebron in the occupied West Bank spread widely online and the soldier was arrested, with rights groups labelling it a summary execution.

The video showed Abdul Fatah al-Sharif, 21, lying on the ground, shot along with another man after stabbing and moderately wounding a soldier minutes earlier, according to the army.

The case has led to major controversy in Israel and sparked political tensions, with far-right supporters and politicians calling for the soldier's release.

Top military brass have however strongly condemned the soldier's actions.