'It's scary': Chely Wright says country singers support LGBT rights -- but they're afraid to speak up 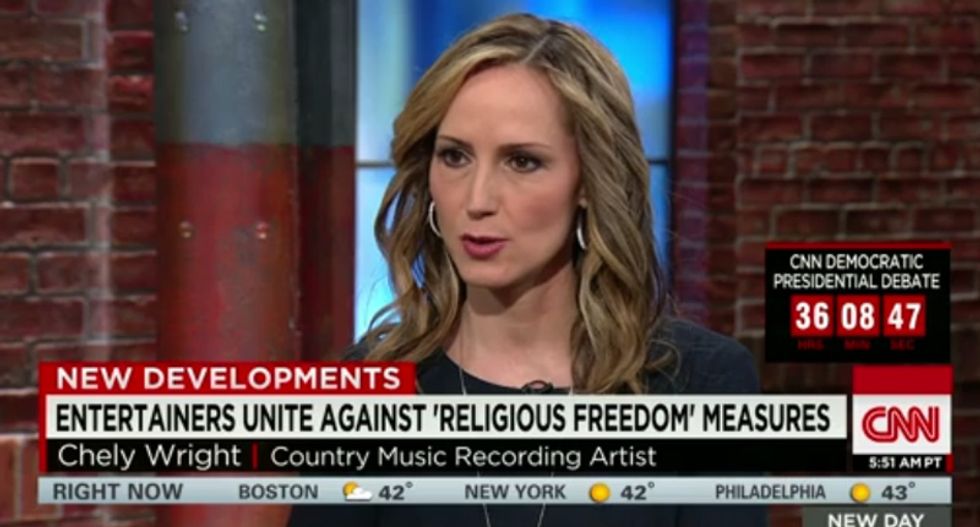 "It's scary, as a country music artist -- it's scary because you know that your -- by and large, our fan base is -- the bedrock of their lives is faith, family and country," she said on CNN's New Day.

"What we have to continue -- what I have to continue to talk about and encourage my contemporaries in country music to discuss is those are the bedrocks of my life still. I'm a married woman. I have identical twin boys who will be three, God help me, next month. And faith is and always will be a big part of my life. So I think that -- I know that there are some like-minded artists in country music. I know because I've talked to them privately, and I think their reticence in coming forward and not just saying 'I love all of my gay friends, I don't judge, I love the sinner, hate the sin.' That's so 2010."

"There are a few that I know who are on the precipice of saying something," she explained. "I think they feel uncertain. They don't know exactly what to say. They don't know what the reaction will be. But the change, what we need in 2016 is for them to absolutely 100 percent affirm the LGBT community and condemn these anti, these very bigoted laws."

Wright told CNN there was "safety in numbers." Once a few country music icons denounced so-called "religious freedom" laws, more would speak up, she predicted.

"A lot of my peers in country music may not think they know a trans person," she added. "I know they know a gay person. I know many of them have gays and lesbians who work for them and they love them, but we need them now to take that very courageous step to affirm and to say, you know, these bills are absolutely ridiculous."

Watch video, courtesy of CNN, below: