John Oliver destroys credit reporting agencies in his greatest prank yet: ‘Those f*ckers are evil’ 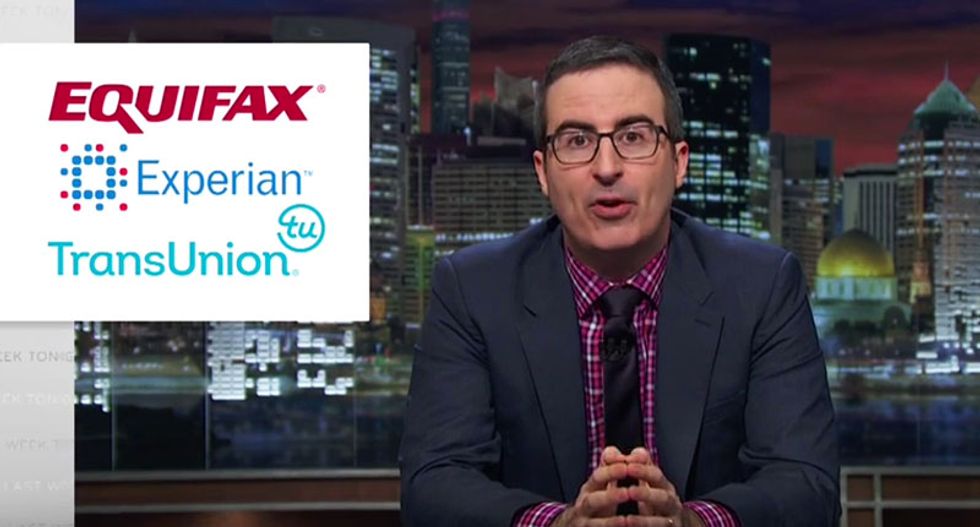 On HBO's Last Week Tonight, host John Oliver took on the credit reporting companies that have the ability to keep you from getting a loan, being a hired at much needed job, and even prevent you from renting an apartment.

As the host noted, there are big three major companies that compile credit information on each and every one of us: Experian, Equifax and TransUnion. They, in turn, provide that information to employers, landlords or lenders.

According to Oliver, nearly 50 percent of employers now use credit reporting as part of the hiring process despite, as a credit report industry executive admitted, there is no correlation between credit worthiness and job performance.

Even worse is what might be wrong in your credit history that you're unaware of until you need a loan or a job -- and by then it may be too late.

Along with a host of smaller -- and unregulated companies  - - these agencies provide credit scores and criminal background checks that have historically contained bad information up to 30 percent of time.

Credit scores may be affected by clerical errors, contain credit info belonging to another person, declare you dead or -- in the case of one man attempting to rent his "dream apartment" who was labeled a "terrorist" in a faulty criminal background check -- destroy your life.

This has led the industry to be the leader in the most complaints filed with the Consumer Financial Protection Bureau.

Yet, despite a history of conspicuously providing faulty and inaccurate information, a trade group put out a report congratulating the industry by citing an FTC report and proclaiming: "95 percent of consumers are unaffected by errors."

"But when you are holding records for more than 200 million individuals, that 5 percent error rate affects 10 million people," Oliver explained. "They're basically saying, 'Great news everyone,  we only f*cked up a group equivalent to the entire population of Sweden! We're the f*cking greatest!' "

With that in mind, the staff at Last Week Tonight, created websites for three companies with names  that are "problematically similar" to the big three for people who go to check their credit scores online  -- but with a five percent chance they go to the wrong place.

And then there is: