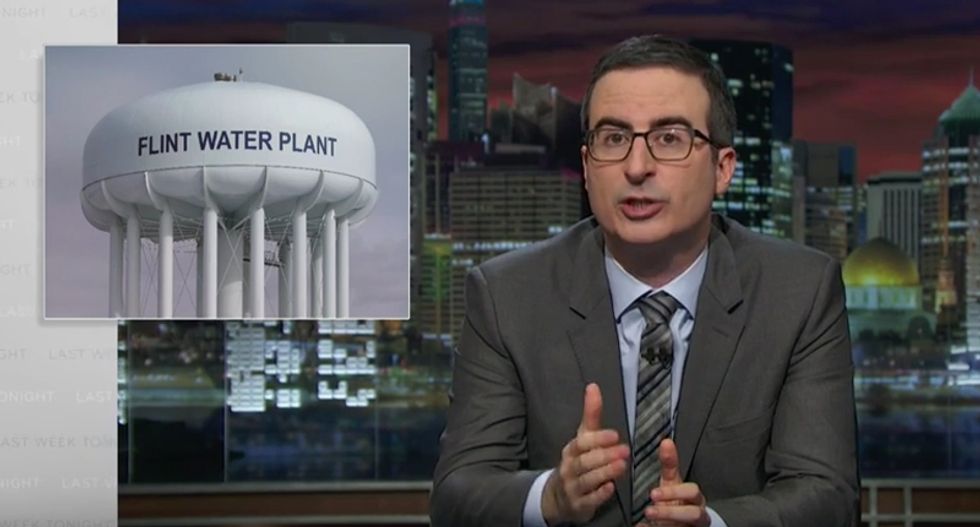 ON HBO's Last Week Tonight, host John Oliver used the Flint water crisis as a jumping off point to hit GOP lawmakers who talk a big game about protecting children from lead poisoning -- but come up short when it comes to allocating funds to do something about it.

Describing the Flint crisis under Republican Gov. Rick Snyder as "bureaucratic f*ckery," Oliver noted that up to 9,000 Flint kids under age 6 may have suffered permanent brain damage after they were exposed to high levels of lead in the city’s water after lawmakers switched water supplies for the largely low income city.

On a national level, Oliver shared clips from the Republican-led Oversight & Government Reform Committee where Chairman Jason Chaffetz (R-UT), as well as Reps. Mark Meadows (R-NC) and Tim Walberg (R-MI), chastised Michigan authorities while wringing their hands over the poisoning of kids.

Oliver pointed to a 2000 study that showed Congress would have to spend $16.6 billion per year for 10 years to eliminate lead paint in buildings and lead in water pipes, while observing that an absolute minimum of $230 million spent annually would protect the poor who are the most vulnerable.

The host also noted a study from Environmental Health Perspectives that projected that “each dollar invested in lead paint hazard control results in a return of $17-$221” in societal benefits.

Oliver observed, "The cost savings still do rank a distant third on my list of reasons to not poison children. Number one and two still being:  It's poison and they're f*cking children!"

“And you would think that our members of Congress would be on-board with doing more to fight lead poisoning. After all, you remember how angry they were about all those kids who got poisoned in Flint, right?” Oliver continued before, reshowing the same CSPAN clips of teh Republican lawmakers -- drawing special attention to Chaffetz's grandstanding for the cameras.

“Concerned?” Oliver continued. “That’s what makes it so frustrating that last year, all of those men voted for a bill that would have reduced the already low funding for HUD-led abatement programs by $35 million -- amounting to a 32 percent cut. And the truth is, if you cut funding like that, a whole lot more children might get poisoned."