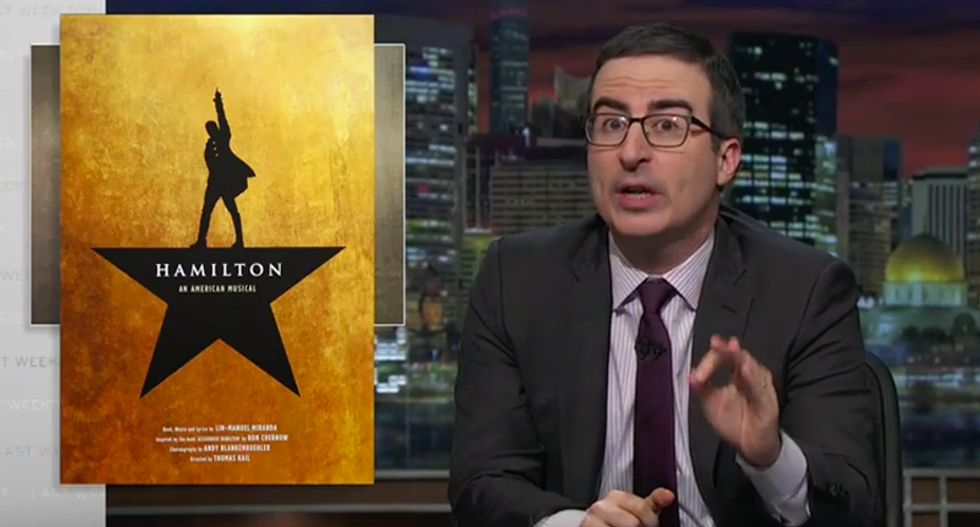 On HBO's Last Week Tonight, host John Oliver tackled the economic crisis devastating Puerto Rico, with the U.S. territory unable to get out from under $72 billion in debt while waiting for Congress to come up with a plan.

To drive the point home, he invited  superstar Hamilton creator and performer -- and child of Puerto Rican parents -- Lin-Manuel Miranda to deliver a dazzling Hamilton-style two-minute rap on the crisis.

At issue is nearly 50 percent of the population living in poverty due to a collapsing manufacturing base, as the bill has come due because of tax incentives given to rich investors by a government that borrowed heavily.

The island's government has already defaulted on bond payments and now faces investors and hedge funds -- described as "vulture funds" -- clamoring for their money even if it means shutting down schools, as well as hospitals just when the island is facing a medical crisis from the mosquito-borne Zika virus.

“The good news here is, Congress is now considering a bipartisan bill that would give Puerto Rico some breathing room to negotiate with creditors,” Oliver explained as he noted, “This could be a real help to Puerto Rico."

Oliver devoted special attention to hedge funds which he believes are behind a "dark money" multi-million dollar campaign designed to keep Congress from helping to restructure the debt, or possibly changing a law that keeps Puerto Rico from going into Chapter 9 bankruptcy.

Acknowledging that it is hard to force members of Congress to pay attention and provide relief needed by Puerto Rico and its 3.5 million American citizens, Oliver turned the mic over to Lin-Manuel Miranda.

“Along with suicidal tax incentive declarations- ‘Yeah we’ll pay your bonds first, close the hospital, fuck the patients.'" Miranda rhymed. "This is an island, 100 miles across and a hurricane is coming and we’re running up a loss.”