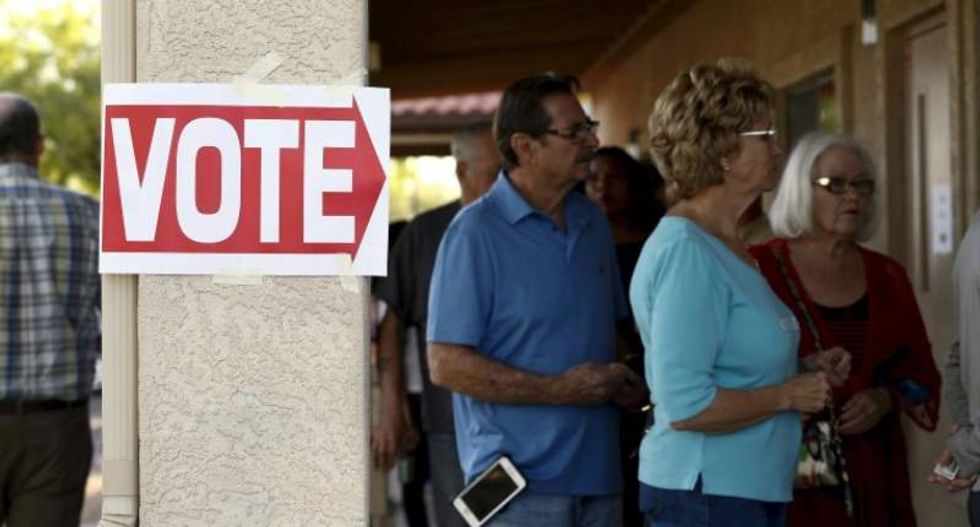 People wait to vote in the U.S. presidential primary election at a polling site in Glendale, Arizona on March 22, 2016. (Reuters/Nancy Wiechec)

The U.S. Department of Justice has launched an investigation into the handling of last month's presidential nominating contest in Arizona's most populous county, citing complaints of exceedingly long lines at polling places with high levels of minority voters.

The Justice Department's civil rights division has asked Maricopa County, which includes Phoenix, to provide detailed information that could help authorities determine whether the March 22 primary election violated federal law, including how the number and locations of polls were decided.

The Justice Department made the request in a letter dated April 1.

The letter followed a call for a federal probe by Phoenix Mayor Greg Stanton, a Democrat, immediately after the election, calling the vote "a fiasco" as he cited "unacceptably disparate distribution of polling locations."

In what officials called a cost-cutting move, Maricopa County slashed its polling sites to 60, down from 200 in 2012. Voters last month waited in line for up to five hours to cast ballots and well into the night at the sharply reduced number of polls.

In its letter, the Justice Department cites reports of "a disproportional burden in waiting times ... in some areas with substantial racial or language minority populations."

The Justice Department set an April 22 deadline for a response.

Following the election, officials said their decisions on polling places were based on recent voting patterns and an increasing number of mail-in ballots.

Karen Osborne, county elections director, denied there was any intent to rob voters of their rights and said officials would comply with the Justice Department request.

"This is a request for information," Osborne said in a brief interview on Monday with Reuters. "We are going to gather the information, and we will get it together by the 22nd, and we will make it public."

The state formally certified the election on Monday and candidates have five days to contest the results. In the Republican contest, Donald Trump won, while in the Democratic contest, Hillary Clinton won. An attorney for Democrat Bernie Sanders has said his campaign is considering a challenge.

(Reporting by David Schwartz in Phoenix; Editing by Curtis Skinner and Leslie Adler)