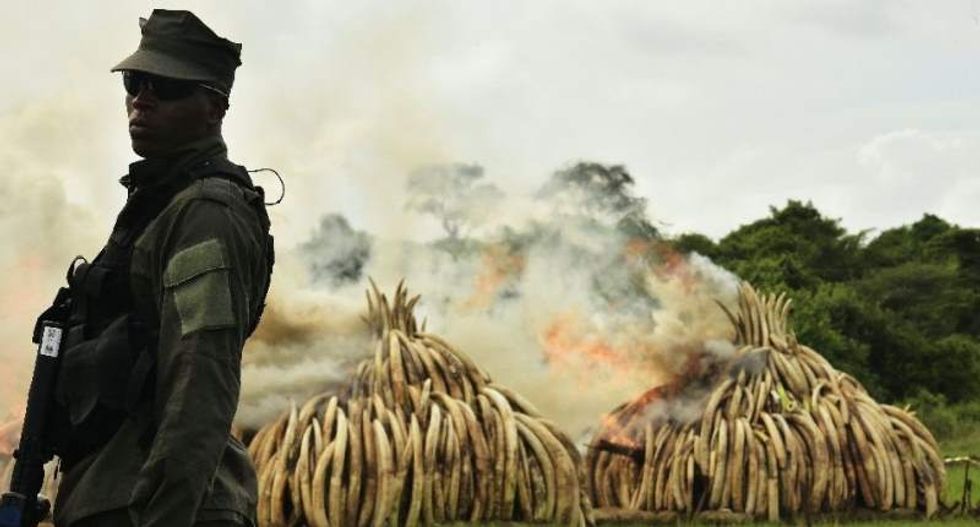 A ranger stands in front of burning ivory stacks at the Nairobi National Park on April 30, 2016 (AFP/Carl De Souza)

Eleven giant pyres of tusks were set alight Saturday as Kenya torched its vast ivory stockpile in a grand gesture aimed at shocking the world into stopping the slaughter of elephants.

Huge white clouds of smoke spiralled into the sky as the flames took hold, fuelled by thousands of litres of diesel and kerosene injected through steel pipes.

Lighting the fire in Nairobi's national park, Kenyan President Uhuru Kenyatta demanded a total ban on trade in ivory to end the "murderous" trafficking and prevent the extinction of elephants in the wild.

"The height of the pile of ivory before us marks the strength of our resolve," Kenyatta said, before thrusting a burning torch onto the ivory.

"No-one, and I repeat no-one, has any business in trading in ivory, for this trade means death of our elephants and death of our natural heritage."

The tusks are expected to burn for days.

Kenyatta on Friday led a summit of African heads of state and conservationists pushing for a total ban.

"We will not be the Africans who stood by as we lost our elephants," he told the meeting in a keynote address.

The bonfires are the largest-ever torching of ivory, containing 105 tonnes from thousands of dead elephants, seven times bigger than any stockpile burned before.

Another 1.35 tonnes of rhino horn are also being burned, representing the killing of around 340 of the endangered animals.

President Ali Bongo from Gabon, who lit one of the pyres, spoke of the "massacre" of forest elephants in central Africa, and said he backed moves to stop the sale of all ivory.

"Unless we take action now we risk losing this magnificent animal," Bongo said at the ceremony, telling poachers he was "going to put you out of business, so the best thing you can do is to go into retirement now".

The pyres contained some 16,000 tusks and pieces of ivory.

Kenya has a long history of ivory burnings, spearheading a wider movement of public demonstrations across the world, but nothing on this scale before.

On the black market, such a quantity of ivory could sell for over $100 million, and the rhino horn could raise as much as $80 million.

But Kenyatta dismissed those who put a cash value on the ivory.

"For us, ivory is worthless unless it is on our elephants," Kenyatta said.

But despite the staggering size of the piles being burned, totalling some five percent of global stocks, the ivory represents just a fraction of the animals killed every year.

Kenya Wildlife Service chief Richard Leakey called on all African nations to follow Kenya in destroying ivory and rhino horn, saying it was "shameful" to keep stocks in case of possible future sale.

"They are speculators on an evil, illegal commodity," Leakey said.

The ivory seized from poachers and smugglers over several years -- as well as from animals who died naturally -- is equivalent to just a quarter of the number of elephants killed each year to feed demand in growing economies in Asia, eager for an elephant's tooth as a status symbol.

The Convention on International Trade in Endangered Species of Wild Fauna and Flora (CITES) banned the ivory trade in 1989.

Activists say destroying the stocks will put anti-trafficking efforts at the top of the agenda at the next CITES conference.

China, which has tightened its laws on ivory imports, allows the resale of ivory bought before the 1989 ban, but activists say the trade in legal ivory acts as a cover for illegal imports and call for a complete ban on sales.

But Kenyan media, which have covered multiple ivory burns ever since the first large pyre was torched in 1989, as well as the killing of elephants that continued unabated once the publicity event was over, appeared far more cynical.

All three main newspapers ran cartoons questioning the long term impact and motivation, pointing to the government's accountability in allowing the animals to be killed in the first place, and warning that without tackling corruption, poaching would continue.

The Standard newspaper's cartoon showed one image of the pyre on fire today, and another tomorrow with vultures marked corruption, greed and incompetence feasting on a freshly killed elephant.