Larry Wilmore crushes O'Reilly: 'When the f*ck have you ever walked in a poor black neighborhood?' 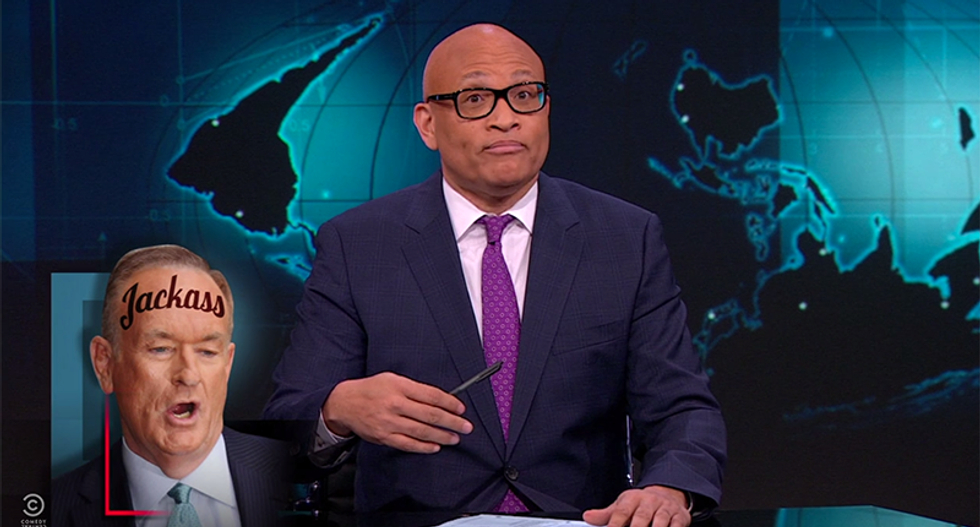 "Nightly Show" host Larry Wilmore refuses to let Bill O'Reilly get away with his racism. Last week Wilmore waged a war against the Fox News host for his insulting comments that black people can't get jobs because they all have forehead tattoos. This week O'Reilly doubled down on his "I'm not racist" comments by saying that his hecklers are wrong because they don't really care about the black community, anyway.

"The worst part is that O'Reilly had the gall to be upset by the backlash from his statements," Wilmore said before playing O'Reilly's Monday episode, where he called his critics "race hustlers" and claimed they haven't "walked the streets of black neighborhoods lately." O'Reilly then used his waving hands to diminish the accusations of "racism" hurled at him.

Wilmore was having none of it. "No, regular people can accuse you of racism," he said waving his hands like a Price is Right model. "You can't use fantasy hands to describe racism, okay? Fantasy hands are best for saying things like ta-da! And when the f*ck have you ever walked in a poor black neighborhood? Like I'm supposed to believe you spend your Saturday strolling through Compton counting forehead tattoos, right?"

Frustrated, Wilmore confessed he's tried everything to get through to the Fox News host. "Talking reasonably isn't going to do it. You know what, I'm going to have to take you to church," he concluded as the stained glass appeared behind him.

"The devil has come in Bill O'Reilly's clothing," Wilmore said in his preacher voice. "Now, you preach a message of a lack of hard work and motivation, Mr. O'Reilly, but what you fail to see is that black people work twice as hard to gain half as much," he said to a chorus of amens. "It's not tattoos on our foreheads that condemn us, it is separate but unequal education, red-line housing, banks that will not provide us loans and a criminal justice system designed to keep us in chains. Those are the proverbial forehead tattoos that consecrate the mark of the beast for black people in America. Can I get another amen?"

"We don't need tattoos on our foreheads when all people like Bill O'Reilly see is our inky black skin. Did Eric Garner have a tattoo on his forehead when he was strangled in the street? No! Did Trayvon Martin have a tattoo on his forehead when George Zimmerman decided to end his life?" The audience shouted "No!" in solidarity. "Demons walk among us, church, and earthly demons like Bill O'Reilly may pretend that they are the victims, but we know better. Though they cry the tears of oppression, we are the ones who are doing the oppressing with their blasphemous lives."

Wilmore closed with a line of fake scripture, "Yea, though I walk through the valley of the shadow of death known as Fox News I will fear no evil, for the truth are with me." He closed with the plea for all Americans, "Lead not into temptation of Bill O'Reilly but cast him out of these airwaves, church. Cast him out! Cast him out! You don't hear me, cast him out! Or just don't watch Fox News, even though I realize your access to quality news programs is limited. Can I get a hallelujah? Much like Jesus, we'll be right back."

Check out the amazing video below: