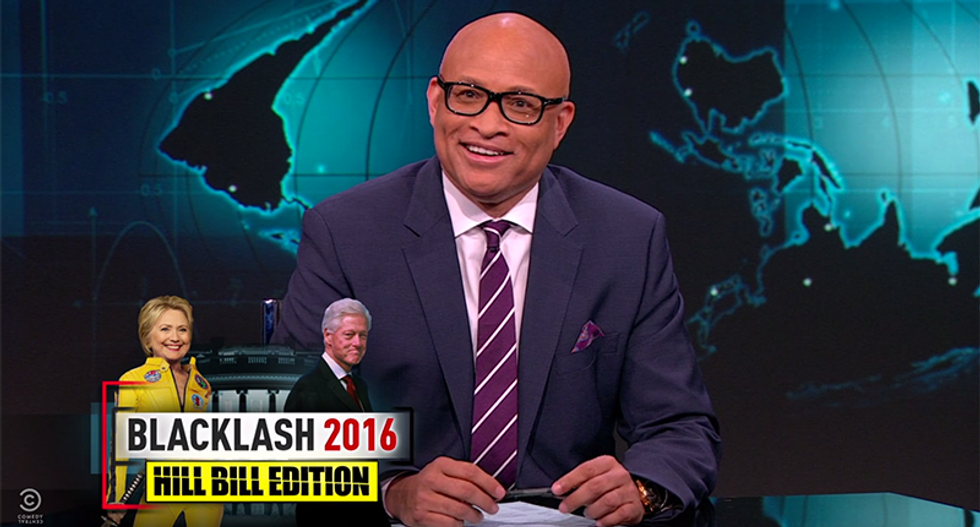 It's as if former President Bill Clinton doesn't want his wife Hillary to be president. As we reported last week, Clinton was in Philadelphia when activists from #BlackLivesMatter interrupted his speech. Rather than hear them out, play dead or any other manner of avoidance, Clinton accused them of defending "gang leaders."

"When your wife, who's running for president, is having issues with them, you probably shouldn't answer like this," Wilmore explains before playing the full clip of Clinton's clumsy response.

Wilmore explains how Clinton's 1994 Crime Bill did more to put African-Americans behind bars than it did protect communities from violence. "As First Lady, Hillary didn't vote on the bill but she did stump for it and she's still criticized for what she said in this speech," said Wilmore before playing a clip of Clinton using the 90s buzzword "superpredator."

"A little context here: The term 'superpredator' was all the rage in the 90s, you guys," Wilmore begins. "In fact, here's John Delulio, the criminologist who coined 'superpredator' backing away from having characterized the supposed onslaught of teen crime." Wilmore then plays a clip from a 2014 interview with Delulio, who admits he was wrong in the 90s, and predictions were "about as far off as you could possibly get."

"Ok, that's how wrong the idea of the superpredator was. The person who created it wants nothing to do with it," said Wilmore. "So, Bill, in his efforts to be a horrible surrogate for Hillary went on to apologize for his #BlackLivesMatter kerfuffle the only way he knows how." That way was the non-apology apology.

"I almost want to apologize," Clinton explained to another rally audience the following day.

"Almost want to apologize?!" exclaims Wilmore. "Ok, there are two types of apologies: An apology and a non-apology, but an almost-apology is not a thing. Commit! 'I almost got you flowers," he says in his Bill Clinton impression. "'Cause I almost love you.'"

While Bill Clinton might seem like a political ninja, Wilmore says that it's almost as if he's flicking those sharp metal stars any old place and hitting anyone and everyone in the process. He plays a compilation of Bill Clinton's most accidental moments of unfortunate phraseology. "Bill, if you keep that up, you know what you might be saying in November? 'Well, you were almost president. Hey, I almost voted for you! I'm almost sorry you didn't win.'"