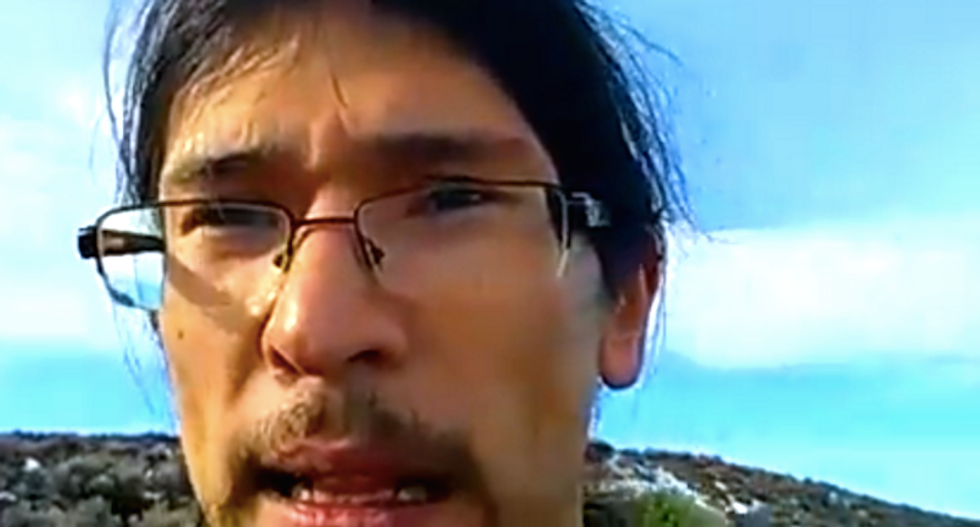 A federal judge denied bond to the last occupier to surrender at an Oregon nature preserve during an unusual and emotional court hearing.

David Fry, who streamed live audio and video during the final days of the Malheur National Wildlife Refuge occupation, pleaded for pretrial release Monday with his attorney and father, reported Oregon Public Broadcasting.

The 27-year-old Fry was among four holdouts who remained at the nature preserve for 16 days after the police shooting death of rancher Robert “LaVoy” Finicum and the arrests of several occupation leaders.

Fry was the final militant to surrender after threatening suicide and expressing his concerns about prison rape, legal abortion and marijuana laws.

Those threats of self-harm concerned the judge, who ordered Fry held for his own protection to ensure he would live to face trial.

"I look at you as a vulnerable person," said Senior District Judge Robert Jones. "We have to worry about your own safety. In the environment where you are, you're safe.''

Fry explained during the bond hearing that he had come from Ohio to document the occupation and stayed as “the last cameraman" after militant leaders Ammon and Ryan Bundy were arrested.

He insisted that he was "not whatsoever a violent person," and he told the court that he removed ammunition from guns and activated their safeties when he found them lying around in firing position.

Fry argued that weapons later found in his car were stored there for safety reasons, saying the vehicle couldn't be driven because it had a dead battery and flat tire.

His father, William Fry Jr., traveled from his Blanchester, Ohio, home to tell the court he would monitor his son and allow him to work at his dental practice while he awaited trial.

The elder Fry explained that his son had spent five days in a mental health facility in 2009 after he asked a mental health worker to check on him, but he said he had not been hospitalized since and hasn't been prescribed medication.

Fry admitted to the judge that he had attempted to escape from that facility on his first day there, and said he was "snatched" by authorities due to his severe depression at the time.

The judge questioned Fry's father about guns he kept at home, and he explained that his son showed little interest in the collection of shotguns that he keeps in a combination-locked safe.

In the end, however, the judge decided to keep Fry jailed for his own protection until he is tried on a variety of federal charges related to the occupation.

"A lot of things about you are positive," the judge told Fry. "By nature, you're a gentle person. You've shown great affection for animals, the environment and so forth. But when you get into a tight situation, you can act out."

Fry begged the judge to reconsider, saying he was no longer suicidal and was committed to facing his charges in court.

"I don't feel safe here," Fry said as marshals placed him back in handcuffs, and complained that he had contracted a rash or disease while jailed.

The judge said during the hearing that he had received a memo from District Judge Anna Brown, who is overseeing the case against 26 militants charged in the case.

Brown said she preferred to try all the defendants at once, and she hoped the trial would begin shortly after Labor Day.

The US president-elect Joe Biden did two spectacular things last week which may rewrite the assumption that his presidency would return America back to the Barack Obama era. One was the $1.9 trillion COVID-19 relief plan Biden rolled out Thursday and the other his choice of William Burns, veteran diplomat, to lead the Central Intelligence Agency.

Seemingly unrelated, these two things convey a powerful signal that Biden understands that the real pandemic danger in America is social collapse and what is needed is a national policy that prevents societal disintegration — and a foreign policy which reflects that top priority.