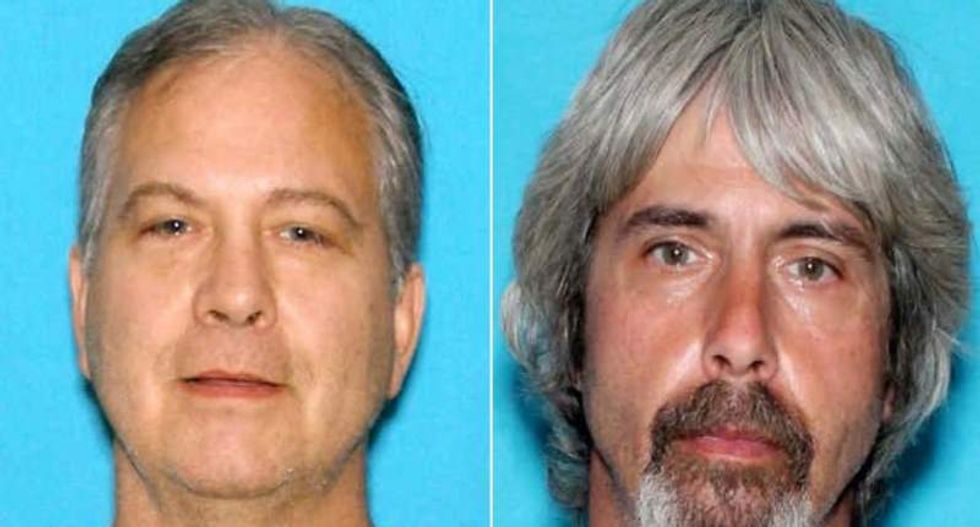 John (L) and Tony Reed are pictured in this undated handout photo. A manhunt for the Reed siblings, linked to the murder of a married couple in Washington state, stretched into a second day on April 18, 2016, authorities said. (Snohomish County Sheriff’s Office/Handout via Reuters)

A nationwide manhunt for "armed and dangerous" brothers suspected in the presumed murder of a married couple who lived next door to one of the men in rural Washington state entered a second day on Monday.

Patrick Shunn, 45, and his wife, Monique Patenaude, 46, were reported missing last Tuesday by neighbors in Arlington, Washington, about 40 miles north of Seattle.

Two days later, a Land Rover and Jeep belonging to the couple were found in a wooded area about 200 feet apart near the community of Oso down an embankment about 10 miles outside Arlington.

A search for the men, John Reed, 53, and Tony Reed, 49, was launched on Sunday after detectives found evidence linking them to the couple, Snohomish County Sheriff Ty Trenary said in a statement.

"Detectives believe the couple were the victims of homicidal violence based on evidence collected at the scene of the missing couple's vehicles, as well as the former residence of John Reed," Trenary said.

The men are both convicted felons and considered "armed and dangerous," the sheriff added.

The evidence included surveillance video of the men driving the cars before they were disposed of, authorities said.

John Reed and the couple were neighbors, living on adjacent properties in the sparsely populated rural area near Oso, a spokeswoman for Trenary's office, Shari Ireton, said.

Oso was the site of a 2014 mudslide that killed 43 people. John Reed was among the survivors.

Ireton said the missing couple had a dispute with Reed at some point, but she had no further details. She added the search area was now nationwide.

Local TV station King 5, citing court records, reported that Shunn and Patenaude had legal disputes with neighbors over the use of land and access to the nearby Stillaguamish River. Their families told King 5 the couple loved the outdoors.

On Sunday, Trenary said detectives found a vehicle belonging to John Reed in Ellensburg, about 140 miles southeast across the Cascade mountains from Arlington.

Patenaude was last seen on Monday afternoon near the couple's home. Shunn has not been seen since leaving work in Kirkland, a Seattle suburb, the same day.