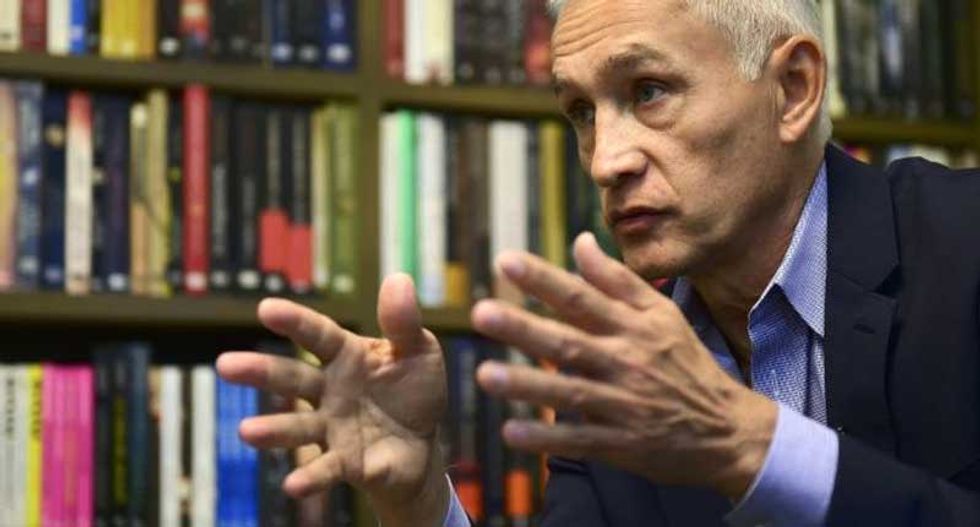 It featured drama and tension fit for a telenovela: A bouffant-haired, billionaire-turned-politician clashing with a famous TV journalist intent on getting answers.

The anchor for Univision, a US Spanish-language channel, was trying insistently to ask a question about immigration when Trump shot back that the journalist had not been called on.

"Go back to Univision," Trump barked and a security guard escorted Ramos out.

The fracas erupted just two months after the real estate tycoon entered the race for the Republican nomination with harsh words about Mexican immigrants, calling them rapists and vowing to make Mexico pay for a massive border wall.

"We were tremendously wrong to not have confronted him from the beginning," Ramos, 58, told AFP in an interview in Mexico City on Monday.

"Many governments and many media simply did not react to the danger of someone who was attacking migrants, Muslims and women," he said, referring to other controversial comments made by the Republican frontrunner.

Ramos lamented that the "danger" came from Trump's ability to capitalize on anti-establishment anger in the United States while "allowing racist and discriminatory sentiments, which many thought no longer existed, to surface."

"There's a real demographic revolution in the United States, a revolution in which whites will become minorities in 30 years," Ramos said, referring to the ever-growing Hispanic community, standing now at 17 percent of the US population.

"So I think that there's resistance among many Americans against seeing their country, accents and colors change."

Ramos, who lives in Miami, considers himself an immigrant even though he has acquired US citizenship.

He crossed the border more than 30 years ago after, according to him, Mexico's powerful Televisa network censured his first report.

Ramos, silver-haired and blue-eyed, became a renowned journalist at Univision, which caters to the estimated 55 million Latinos who live in the United States.

He has anchored the channel's nightly news program since 1986, attracting 2.5 million viewers.

He also hosts a Sunday talk show, writes a weekly column and, since 2013, leads "America with Jorge Ramos" on Fusion, an English-language channel.

Last year, Time magazine named him on its list of the world's 100 most influential people. Ramos used his acceptance speech to call for the resignation of President Enrique Pena Nieto, but his battles with Trump have garnered more headlines.

Horrified at the prospect of Trump becoming president, Ramos believes in journalism that "takes sides."

Trump said earlier this year that he was willing to accept an interview with the "anchor (not) baby" -- a play on words with the phrase "anchor baby," which backers of tougher immigration laws use to refer to children born on US soil to illegal migrants.

But Ramos said Trump has not replied to his interview requests.

"I am ready whenever he's ready to speak, but I think that he knows that it will be a tough, confrontational interview, and he doesn't want that right now," Ramos said, smiling.

Ramos warned that "nobody, absolutely nobody can get to the White House without Latinos (who vote)."

But the star journalist, who is promoting his 12th book, "Sin Miedo" (Without Fear), downplayed his influence among Hispanics.

"A journalist's place is as a counterweight," he said.

While Ramos said that journalists cannot have any political affiliation, he appears somewhat uneasy when asked about his daughter's work for the campaign of Democrat Hillary Clinton.

When he interviewed Clinton or moderated a Democratic debate, Ramos reminded viewers about his daughter's job in order to show there was "no conflict of interest."

A volcano is erupting again in Iceland. Is climate change causing more eruptions?

The Fagradalsfjall volcano in Iceland began erupting again on Wednesday after eight months of slumber – so far without any adverse impacts on people or air traffic.

The eruption was expected. It’s in a seismically active (uninhabited) area, and came after several days of earthquake activity close to Earth’s surface. It’s hard to say how long it will continue, although an eruption in the same area last year lasted about six months.

There have not yet been any monkeypox deaths in the U.S., but more than 7,000 cases have been diagnosed thus far, and the spread of the virus to nearly every state is concerning. While most cases are still occurring among men who have sex with men, the virus is also transmitted through nonsexual skin-to-skin contact, so there is a risk of people in other population groups contracting the infection. The federal declaration is intended to help slow the spread of the virus among men who have sex with men and stop it from spreading to new communities.

An explosive new report published in the New Yorker details the difficulties that many American military leaders had with containing former President Donald Trump during his one term in the Oval Office.

One particularly noteworthy story in the report details Trump fuming to former White House chief of staff John Kelly that the American military brass did not give him the kind of unconditional loyalty he believed he deserved.