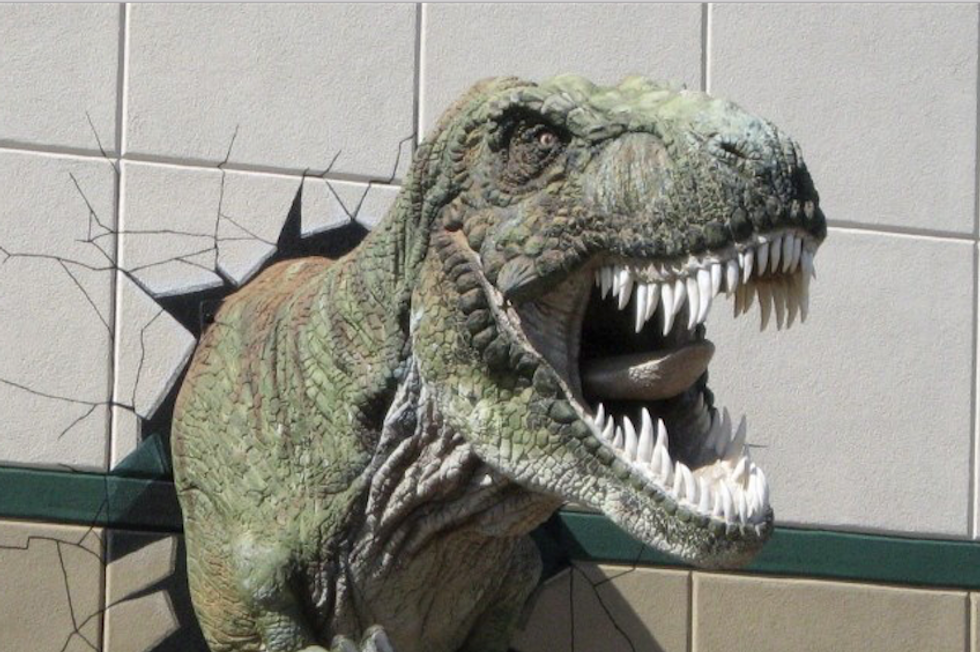 Stan the T. Rex at the Glendive Dinosaur and Fossil Museum (Facebook.com)

The Bible is a literal, factual history of the world, including Noah's Ark and the Great Flood. Dinosaurs rode the ark with Noah. People lived 10 times longer in Biblical times because the Earth's atmosphere had more oxygen then.

These are just a few of the wrong-headed "facts" on display at The Glendive Dinosaur & Fossil Museum in Glendive, Montana, according to the Great Falls Tribune, which published an exposé on the creationist museum this week.

The Dinosaur and Fossil Museum is the property of Otis Kline, who has some real fossils on display, but has used them to stitch together a very different narrative of the planet's history than the one commonly accepted by scientists.

The Tribune sent a reporter to take a tour of the museum and reported back that guests are being told that:

•The Bible is an accurate, literal history of the world. The world is about 6,000-6,400 years old and a six-day divine creation.

•The flood of the Bible’s book of Genesis, the Noah’s Ark flood, split the continents apart with water called from the deep and set off a worldwide cataclysm that buried the creatures that would become fossils in one mass event. The long flood, ensuing volcanic eruptions and an ice age radically changed the planet.

•Dinosaurs and humans lived at the same time. Dinosaurs were on the ark.

•Life can not be traced back as branches to a trunk. God created “kinds,” like dog kind from whence sprung dogs, wolves, coyotes. Humans and primates don’t come from the same “kind.” Neanderthals, Cro-Magnon and humans are all of “humankind,” which came from Adam and Eve.

Kline assembled the museum with the help of volunteer labor and donations from 2005 to 2009. He sometimes leads tours himself and tells guests that the presence of trilobite fossils in places like Kansas is evidence of the Great Flood from the Bible's Book of Genesis.

Another tour guide, Robert Canen, explained to visitors that people lived 10 times as long in the Biblical era because the atmosphere had more oxygen. Animals, he said, lived even longer.

When asked what he thinks of the possibility that his ideas might be misinformed, Canen said, "I have no problem admitting when I’m wrong, and that’s something science and this whole field could use more of."

“We think the evidence fits what the Bible says,” he went on. “You don’t have to be afraid to dig up dino bones.”

The museum's star attraction is its skeleton of a Tyrannosaurus Rex, nicknamed Stan.

The museum also features a Noah's Ark exhibit that shows the old testament patriarch rescuing all of the animals of the world from God's Great Flood.

“People ask, did he take dinosaurs? Yes,” Canen said told the Tribune reporter. “You could take a juvenile with the genetic capacity to be all dinosaurs.”

The pseudo-scientific exhibits include a "new kind of dating" method that refutes radiometric dating and shows that dinosaurs, humans and primitive mammals all lived simultaneously, but at different parts of the globe. The fossil layer is not a progression of simple to complex organisms, they argue, but of deep to shallow water and land. Dinosaurs, the museum says, were coastal animals, while mammals and humans lived further inland.

"They hold onto (the idea) so long they don’t allow anything to question it,” he said. "If you can trust any historical document, you can trust the Bible."

Trump's demand for a special master looks like a 'giant backfire': legal scholar

New York Times reporter Charlie Savage wrote in his Wednesday piece that it is quickly becoming clear that Donald Trump may be regretting his request for a special master in the Mar-a-Lago documents investigation.

Trump reportedly thought he could delay the investigation into the stolen documents that he stashed at Mar-a-Lago, but his ploy appears to have backfired.