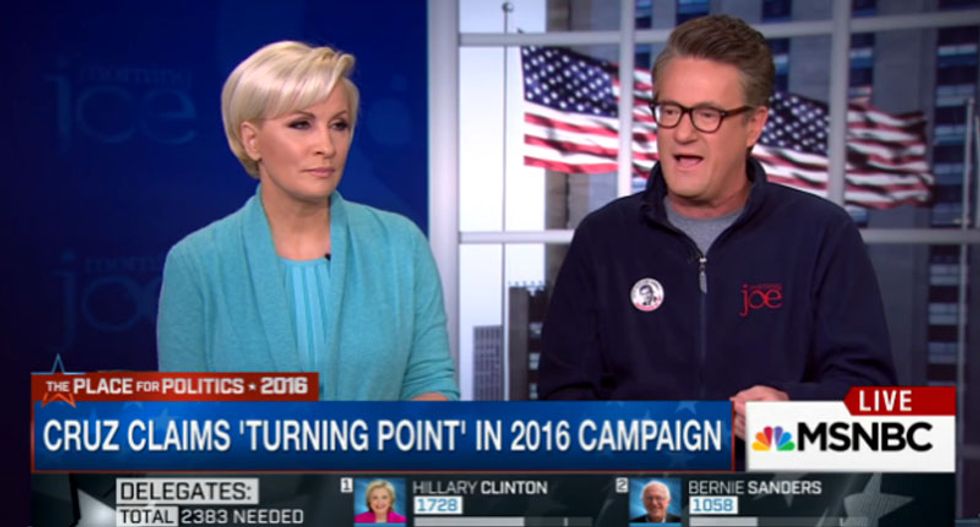 Joe Scarborough mocked Ted Cruz's claim that he defied the media by winning Wisconsin -- which most media observers predicted he would do -- and insisted the Texas senator would never win the Republican presidential nomination.

"Listen, let's just be clear here," Scarborough said. "Ted Cruz will never be the nominee of the Republican Party."

He and other panelists on Wednesday's "Morning Joe" agreed that establishment Republicans had made a mistake by backing Cruz as an alternative to stop Donald Trump, because they said the conservative senator would assuredly lose November's election to Hillary Clinton.

Scarborough insisted that Cruz was not the second-most likely nominee behind Trump, and said the GOP was far more likely to select a nominee who's not even running at this point.

"No, not even close," he said. "Paul Ryan -- you name the list. The guy is loathed, and he is loathed inside (Washington,) D.C., in a way that Donald Trump is not loathed. I know a lot of the establishment hates Donald Trump, but Ted Cruz is the devil that they know, and they don't like him. He's not going to win the nomination."

Scarborough said the GOP establishment was simply using Cruz as a "vehicle to stop Donald Trump."

He agreed that the GOP establishment, including Wisconsin Gov. Scott Walker, had made a cynical gamble on Cruz in hopes of setting up a contested convention so they could select someone besides Trump as the nominee.

Scarborough said voters had actually sent a statement in Wisconsin, which he said pundits always say but voters never actually do.

"It never happens, it's bull," he said. "People go in and they vote usually their heart, very rarely their head. Wisconsin did something last night I've never seen before: You had suburban people who loathed Ted Cruz -- disconnected from him ideologically, disconnected from him socially, disconnected from him temperamentally -- they went in, it's extraordinary. They made the calculation -- we're not going to vote for John Kasich, who we're probably closer to temperamentally, but we're going to vote for the guy who's most likely to stop Donald Trump. It never happens -- it happened last night in Wisconsin."

In the U.K., the group Insulate Britain has been trying to draw attention to the climate change crisis by blocking roads during its protests — a move that inspired U.K. Transportation Secretary Grant Shapps to seek an injunction banning the group from England's "entire strategic road network." British radio host Mike Graham hoped to humiliate Insulate spokesman Cameron Ford when he featured him as a guest on his show on Tuesday, October 26, but the only one Ford ended up humiliating was himself.

The tension between the two was obvious when Graham, in a condescending tone, asked Ford, "What are you glued to, Cameron?" — and Ford, sounding equally condescending, responded, "Just your screen, unfortunately."

In an open letter published simultaneously by the liberal The New Republic magazine and conservative The Bulwark website, a group of strange bedfellows noted they "have long disagreed about many things."