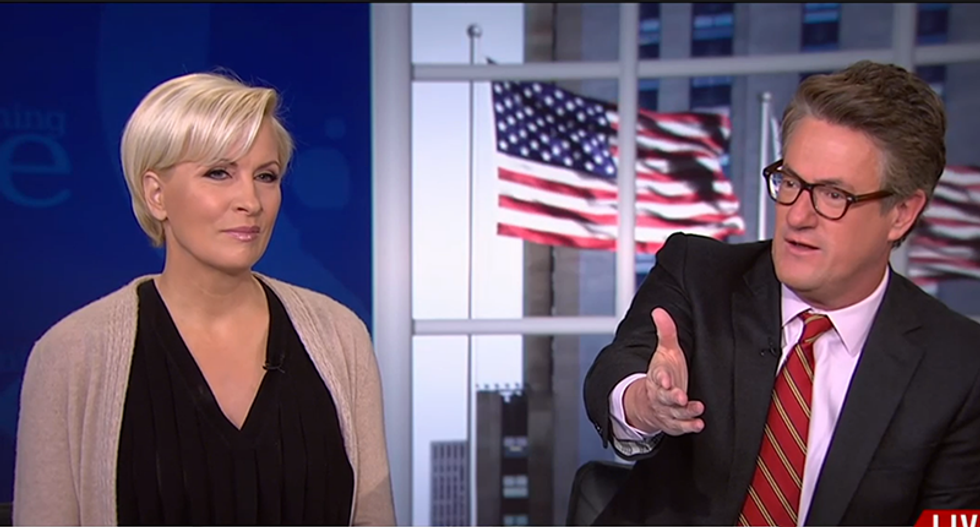 Democratic presidential candidate Bernie Sanders captured another win over the weekend in Wyoming, but despite the 12 points, the victory wasn't exactly that big of a victory. Morning Joe's Joe Scarborough took issue with the string of Sanders' successes saying that a win should be a win.

"He's won eight out of nine," Scarborough began. "He wins by 12 points. I tell you, I would not do well as a Democratic politician. He wins by 12 points; he may not pick up a single delegate, it's seven to six now with a remaining delegate to be decided later? I'm sorry, that's a crushing victory."

With a graphic on the screen showing the delegate count where Hillary Clinton received 11 delegates and Sanders got seven, Scarborough proclaimed balderdash. "We've been talking about rigged systems," he began. "Bernie Sanders wins 56 to 44 percent in Wyoming... why does the Democratic Party even have voting booths? This system is so rigged.

Co-host Mika Brzezinski agreed saying, "But we always talk about voter turnout and how important it is to do your duty as a citizen, there's absolutely no reason any of those people voted, in any of those states. Right? Please, someone, tell me."

Regular guest Mark Halperin attempted to explain that those were the rules of the game but the two co-hosts weren't buying it.

"No, that's not a good answer," Brzezinski said over Scarborough that the system was rigged. "Tell me why those people needed to go vote, because their votes don't matter." Halperin attempted to say that some votes counted when Brzezinski interrupted again, "How? Oh, only in some parts of the country it matters?"

"He won by 12 percentage points and lost the delegate count!" Scarborough shouted.

Halperin continued that the rules aren't likely to change by the winner of a rigged system and that neither the Republican nor Democratic parties will change their primary rules after this election is over.

"Here's a party that sends its activists out and [has] people chattering on TV and chattering on talk radio about voter disenfranchisement," Scarborough argued. "If you make someone show a picture of themselves, this same party tells voters to go straight to hell when they select somebody by 12 percentage points and end up letting the other candidate who lost by 12 percentage points win the most delegates! That, by definition, is voter disenfranchisement!"