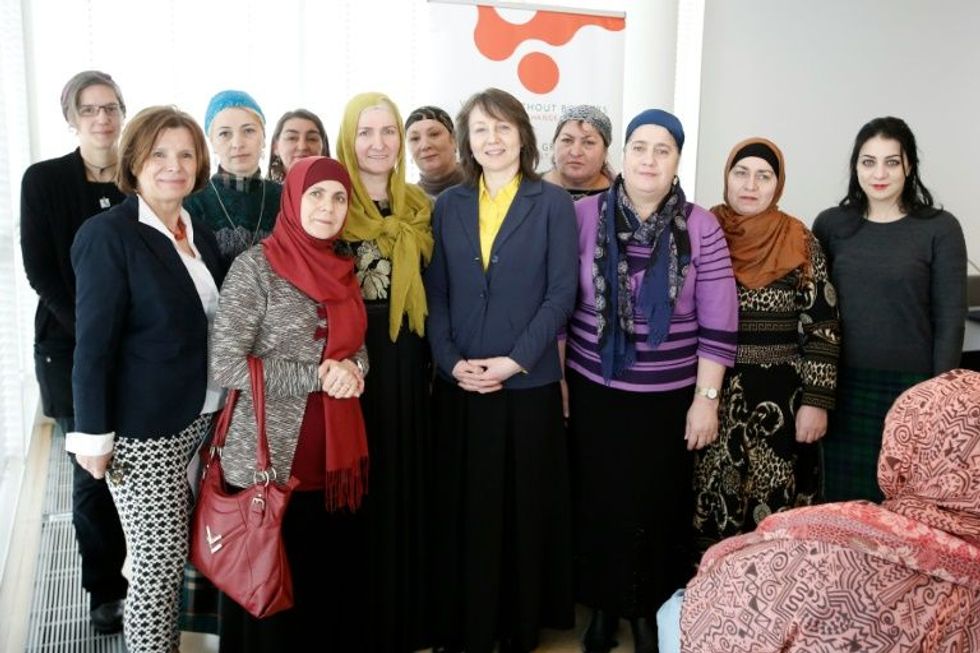 There were small signs that her son was changing: He prayed more and swapped jeans for traditional long tunics.

"But I wasn't worried. Not for one second did Syria enter my mind," Fatima Ezzarhouni told AFP.

And yet that's where the young man was headed in June 2013 when he left his home in the Belgian city of Antwerp, a day after his 18th birthday, to join militants.

Almost three years on, Ezzarhouni gets the occasional phone call from her son confirming he's still alive, but never revealing his exact location.

"I have this feeling that I will never see him again," said the 44-year-old, fending off tears.

"But at least now I know I'm not alone anymore."

Ezzarhouni is one of the newest members of a global project that fights jihadism not with soldiers, but mums.

The so-called Mother Schools teach Muslim women how to spot early signs of radicalisation in children or develop coping mechanisms if the intervention comes too late.

After completing the 10-module course, the graduates then go on to train other women.

The Vienna-based Women Without Borders (WWB) organisation created the initiative in close cooperation with anti-terrorism experts of the Organization for Security and Cooperation in Europe (OSCE), also headquartered in the Austrian capital.

Though independent, the WWB receives funding from various Austrian ministries, the European Union and the US State Department.

"Women are so well placed to work in the security arena because this is a mission about safeguarding their families," WWB founder Edit Schlaffer told AFP.

"They are in direct competition with recruiters, those toxic influences from mosques who step in when children reach adolescence and tell them: 'You're wonderful, glory is waiting for you, join us in building the caliphate.'"

Although there are other female-run programmes targeting radicalisation in various countries, the WWB project is the only truly global one.

The first school opened in 2012 in Tajikistan -- an Islamist breeding ground next to Afghanistan -- before branches were rolled out in other nations plagued by violence, such as Pakistan and Nigeria.

In February, WWB organised its first training session for the new initiative in Indonesia, home to the world's largest Muslim population.

Although most practise a moderate form of faith in this southeast Asian country, the Islamic State (IS) has provided a potent rallying cry for radicals. Hundreds are thought to have joined the militant group in Syria and Iraq.

"We heard from other mothers whose children were recruited by extremists. We could see what their strategies are, which is very relevant," Mother School participant Khotimun Susanti told AFP in Jakarta.

"Indonesian women are not used to speaking out... so we learnt that we need to develop this culture of openness."

Schlaffer stressed that a key part of the programme focused on current affairs.

"I've met mothers in Indonesia who thought their sons had gone off to work as foreign labourers in Syria. They had no clue where Syria was. When I told them it was a war zone, they broke down," she said.

The project is now also taking root in Europe where terrorists have been spreading fear with a string of attacks, the latest hitting Brussels on March 22.

While schools in Austria and Belgium are already up and running, new ones will open in Britain and Sweden later this year.

Ezzarhouni said she first heard about the initiative from another Belgian mother, Saliha Ben Ali, whose 19-year-old son Sabri died in Syria three years ago.

"Sabri's radicalisation was very fast, it happened in three months and we didn't see the signs," said Ben Ali, a social worker from the city of Vilvoorde, near Brussels.

"Four days after he had left, he sent his first message: 'Please mum, don't be angry. I came here to help Syrian people because nobody helps them.'"

Both Ezzarhouni and Ben Ali recently attended a Mother Schools workshop in Vienna, which united Muslim women from around the globe to share their experiences and receive training on engaging their communities back home.

Participants included the first 15 graduates from Austria's own Mother School.

The women all belonged to the country's 30,000-strong Chechen community, which has lost dozens of young people to IS.

"It's not a secret that our community has been hit hard by the radicalisation of youth," said Maynat Kubanova, a Chechen journalist and trainer at the Austrian school.

"Parents brought their children from Chechnya to Austria to save them from war. Now they lose them to a foreign conflict. The shock sits deep. But that doesn't mean that we are without power and just have to wait for recruiters to snatch our children away."

This determination to fight what Kubanova called "an invisible enemy" was palpable among those taking part in the workshop.

At the end of the three-day gathering in Vienna, many swapped contact details and hugged each other to say goodbye.

"These women have given me hope," said Ezzarhouni.

"There are many people who see us as mothers of terrorists. But we are mothers of courage."