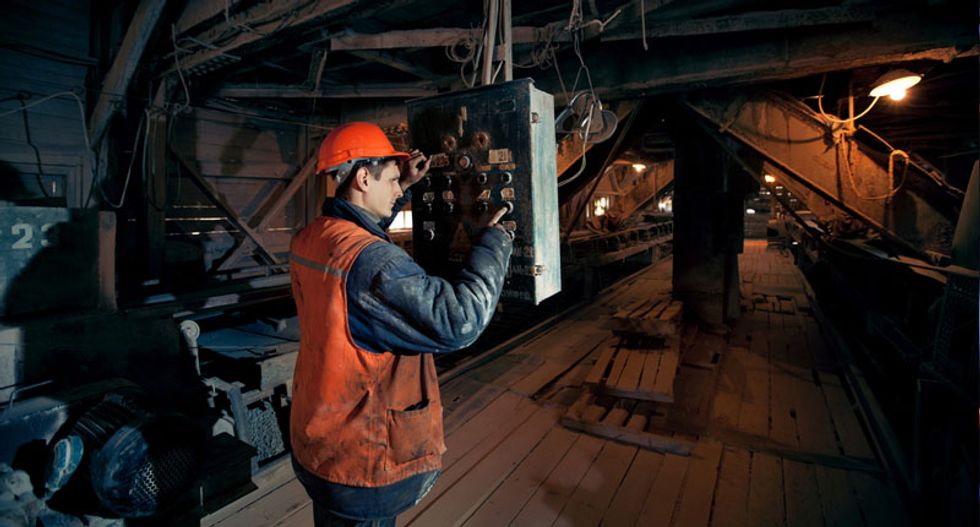 Man working in a mine (Shutterstock)

Members of several Native American tribes say a coal mine operating on a remote stretch of the Texas-Mexico border threatens sacred ancestral ground, and they are joining long-running attempts by environmentalists and local activists to shut the mine down.

Members of Texas’ Lipan Apaches, Pacuache Band of the Cohuiltecan Nation and Carrizo Comecrudo Tribe have teamed with the Comanche Nation of Oklahoma to draw attention to what they allege is the desecration of land being mined by Dos Republicas, owned by Mexican companies partnered in Texas with the Plano-based North American Coal Corporation and its subsidiary Camino Real Fuels.

The protesters hope a planned march this Saturday from the Rio Grande to the coal mine will be part of a larger effort to stop mining which they say threatens ancestral burial grounds.

“This land is sacred and holds ancestral knowledge of the many Native Nations who have shared this living space over thousands of years,” the organizers state on an online petition on Change.org, which has more than 3,500 signatures. The groups allege the tribes were not consulted before permits were issued, and that provisions of the National Historic Preservation Act were not followed.

The tribes are joining a yearslong battle. In 2011, citizens and environmentalists from Eagle Pass and Maverick County tried to stop the Texas Railroad Commission from granting the company a permit to mine low-grade coal from about 6,300 acres of land in Maverick County.

Opponents claimed transporting the low-quality coal would release hazardous particles into the air, and that the discharge from the operations would run off into a creek that ends in the Rio Grande, a main water source.

But the permit was awarded in 2013 and has survived several court challenges. The coal is shipped to Mexico for use there because its low quality makes it unusable in the United States.

The Native American effort is part of a two-pronged strategy that includes legal maneuvering by Maverick County and the city of Eagle Pass, which are filing petitions for review with the Texas Supreme Court in hopes of reversing the 3rd Court of Appeals decision last year that upheld the Railroad Commission's decision to approve the permit.

Dos Republicas spokesman Rudy Rodriguez said the company is fine with letting opponents of the mine speak but insisted the company has provided the impoverished patch of the Texas-Mexico border an economic boost. It has also followed all the state and federal regulations required, he said.

“We respect the free speech of everyone” involved, he said. “But we’ve moved over a million tons of coal by rail, and it’s in a remote area where people don’t really know what’s going on.”

Rodriguez added that since the company began its mining operations, it has hired 180 employees and doles out about $1.3 million in monthly salaries.

Tane Ward, an environmentalist who is helping spearhead the Native American effort, said support for the latest challenge is growing.

“When we started meeting we started alerting more and more allies,” he said, adding that some of the protesters could come from as far away as the Dakotas. He said even though out-of-state Indian nations don’t have a claim to the land on the Texas-Mexico border, they are supporting the Texans as a symbol of solidarity with all Native Americans whose lands have been taken.

And he argues the coal companies might not have followed protocol.

“There wasn’t a proper consultation done,” he said. “They don’t have respect for the ancestors” of the land.

By Julián Aguilar, The Texas Tribune