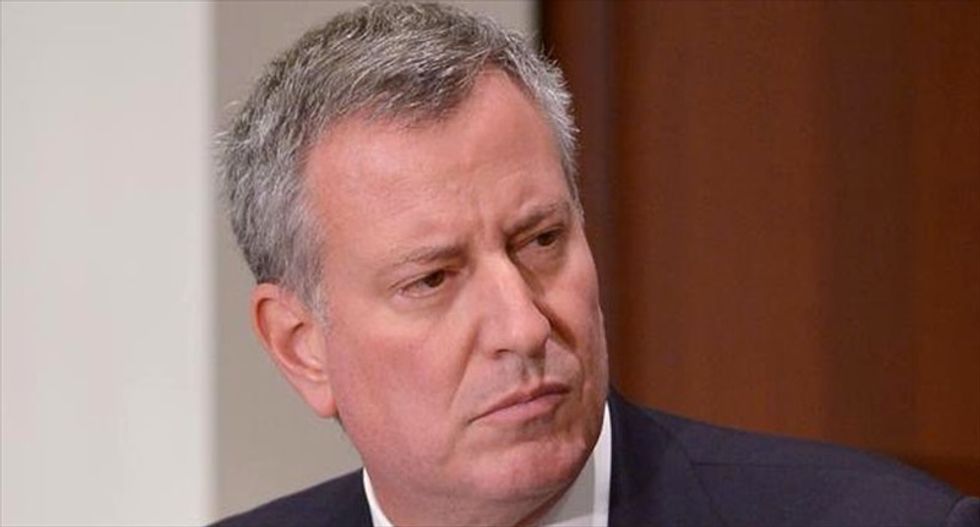 A comic gag turned into a gaffe for Democratic presidential hopeful Hillary Clinton and New York Mayor Bill de Blasio, triggering a social media storm that raged through Tuesday over what some said was their insensitivity to African-Americans.

New York voters head to the polls next week for the primary election on April 19. While Clinton has strong support from black voters, some supporters worry that Democratic challenger Bernie Sanders has begun making inroads with them.

Clinton and de Blasio took the stage on Saturday at the Inner Circle, an annual media roast of politicians that traditionally ends with New York's mayor delivering a snarky rebuttal in the form of a rehearsed skit, often with the help of Broadway cast members.

This year Leslie Odom Jr., who is black and plays Aaron Burr in the hit Broadway show "Hamilton," participated in the planned joke.

In the skit, Clinton kidded de Blasio about his delay in endorsing her bid for the White House.

Clinton then added: "'Cautious politician time.' I've been there."

The joke quickly led to an angry reaction on social media, with commentators criticizing Clinton and de Blasio for being insensitive to blacks. De Blasio's wife, Chirlane McCray, is African-American.

"In what kind of twisted world does a POTUS candidate make a #CPTime joke at a high $ event "inner circle" & ppl think it's ok... #wakeup" Jenny Li @jennyjenli posted on Twitter on Tuesday.

"@HillaryClinton did the equivalent of kicking Blacks in their butts by participating in #CPtime "joke". #NYprimary," tweeted Anthony B. @PoliticalAnt.

De Blasio defended the joke in an appearance on CNN on Monday. "It was clearly a staged event," he said " ... I think people are missing the point here."

Clinton did not immediately respond to a Reuters request for comment.