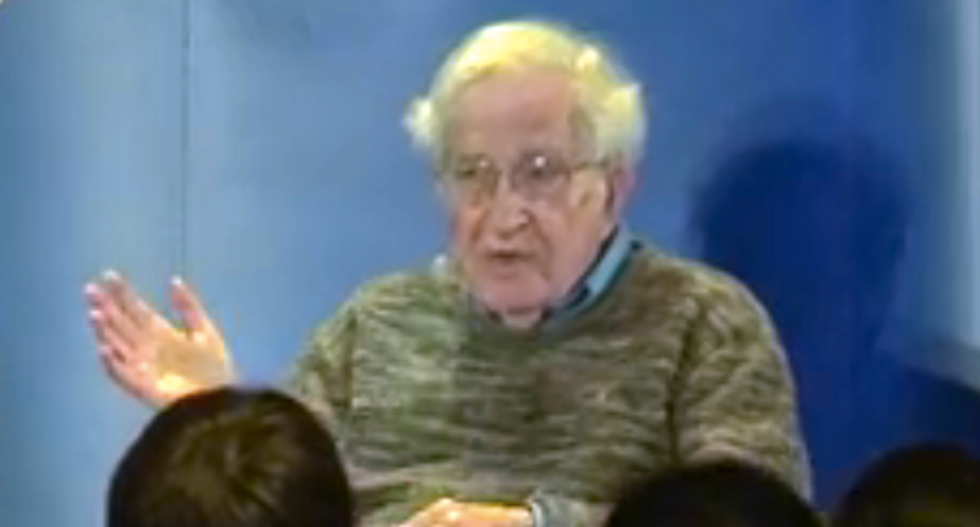 "He’s considered radical and extremist, which is a pretty interesting characterization, because he’s basically a mainstream New Deal Democrat," Chomsky said. "His positions would not have surprised President Eisenhower, who said, in fact, that anyone who does not accept New Deal programs doesn’t belong in the American political system. That’s now considered very radical."

He said those New Deal policies have long enjoyed the support of Democratic voters and many independents.

"When Obama put through the Affordable Care Act, there was, you recall, a public option, but that was dropped," Chomsky said. "It was dropped even though it was supported by about almost two-thirds of the population. You go back earlier, say, to the Reagan years, about 70 percent of the population thought that national healthcare should be in the Constitution, because it’s such an obvious right -- and, in fact, about 40 percent of the population thought it was in the Constitution, again, because it’s such an obvious right. The same is true on tax policy and others."

Chomsky said Sanders could only be considered radical in a political climate that accepted the Republican Party as a legitimate participant in democratic governance.

"We have this phenomenon where someone is taking positions that would have been considered pretty mainstream during the Eisenhower years, that are supported by a large part, often a considerable majority, of the population, but he’s dismissed as radical and extremist," he said. "That’s an indication of how the spectrum has shifted to the right during the neoliberal period, so far to the right that the contemporary Democrats are pretty much what used to be called moderate Republicans, and the Republicans are just off the spectrum. They’re not a legitimate parliamentary party anymore."

He said Sanders had pushed Hillary Clinton and other mainstream Democrats back toward the left and may have built a lasting progressive movement.

"He has mobilized a large number of young people, these young people who are saying, 'Look, we’re not going to consent anymore,' and if that turns into a continuing, organized, mobilized—mobilized force, that could change the country -- maybe not for this election, but in the longer term," Chomsky said.