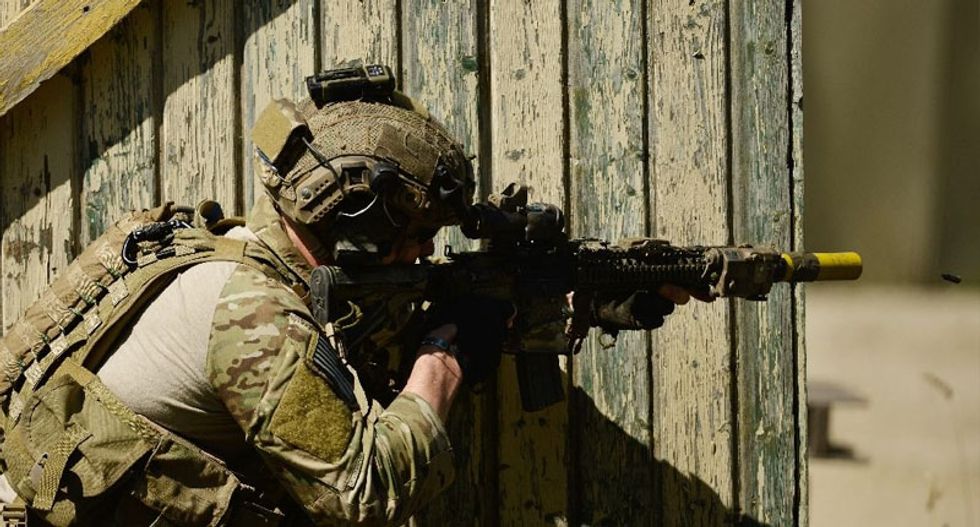 President Barack Obama said Monday the US would send up to 250 more special forces and other military personnel to Syria to help rebels fight the Islamic State group.

Obama was in Germany for talks with Chancellor Angela Merkel, and both later met the British, French and Italian leaders to discuss the battle against IS in its self-declared caliphate across northern Syria and Iraq.

In a speech in the German city of Hanover, Obama hailed NATO partners' progress in pushing back IS, which he called "the most urgent threat to our nations".

"A small number of American special operations forces are already on the ground in Syria and their expertise has been critical as local forces have driven ISIL out of key areas," he said, using an alternative acronym for the jihadist group.

"So, given the success, I have approved the deployment of up to 250 additional US personnel in Syria, including special forces, to keep up this momentum."

The US forces will not lead the fight on the ground but provide training and advice to local forces against IS, he said.

"These terrorists will learn the same lessons that others before them have, which is: your hatred is no match for our nations, united in defence of our way of life," said Obama.

Syrian opposition group the High Negotiations Committee (HNC) said boosting the US military presence to about 300 would be "a good step" and help "rid our country of this scourge".

"But Syria will not be free of terrorism until we see the end of the Assad regime's reign of terror," added HNC spokesman Salem Al Meslet.

While most world powers agree that IS -- which has boasted of beheadings and other battlefield atrocities as well as terror attacks in Paris and Brussels -- must be defeated, they have backed different sides in Syria's complex civil war.

Western powers have offered some support to moderate rebels, while Russia has sent troops and fighter jets to back the regime of President Bashar al-Assad.

Syria's conflict, which began in March 2011 with widespread anti-Assad protests, has since spiralled into a multi-front war that has killed 270,000 people.

A partial ceasefire -- which does not cover IS or Al-Qaeda's Syrian offshoot Al-Nusra Front -- was agreed two months ago in a bid to end the bloodshed.

But the truce has been undermined by escalating violence around the northern city of Aleppo, with dozens killed by government air strikes and rebel rockets.

At least 23 people were killed in regime and rebel shelling in Aleppo on Monday, the Syrian Observatory for Human Rights monitoring group said, following violence that killed at least 26 civilians there a day earlier.

Obama on Sunday pressed for all parties to return to the negotiating table and "reinstate" the internationally-brokered ceasefire -- the clearest indication yet that the White House believes the truce has all but disintegrated.

A White House statement said after Monday's talks in Hanover that leaders were concerned about "increasing violations" of the ceasefire by the regime and obstruction of aid.

Chancellor Angela Merkel said after the five-way meeting that all the leaders shared the "concern that the ceasefire is fragile and is at times being dramatically violated".

Obama, Britain's David Cameron, Francois Hollande of France and Italy's Matteo Renzi had all agreed that the only solution would come through the ongoing peace talks in Geneva, she said.

A Western diplomat in Geneva told AFP that the truce deal "is in poor shape, the result very largely of Assad regime attacks on Syria civilians, towns and marketplaces, as well as on the moderate armed opposition".

But the diplomat said all parties which agreed the truce are committed to maintaining it, "and no member believes the cessation (of violence) to be over".

Obama has come under criticism for his handling of Syria's war, with opponents saying he could have done more to stem the bloodshed.

But the president -- who came to power vowing to withdraw US troops from Iraq and Afghanistan -- has stood firm in his opposition to plunging the United States into another ground war in the Islamic world.

In an interview with the BBC, Obama said that "it would be a mistake for the United States, or Great Britain, or a combination of Western states to send in ground troops and overthrow the Assad regime."

Donald Trump has made history again.

On Wednesday, the House of Representatives voted to impeach him a second time because of his role in inciting violence before the coup attempt last Wednesday at the U.S. Capitol. Trump is now the only president to have been impeached twice, and could easily have been impeached on other occasions for his many other crimes against democracy, the Constitution and the rule of law.

Although the Lincoln Project's Steve Schmidt is decidedly conservative, the former Republican strategist has found himself siding with liberals and conservatives when it comes to denouncing Trumpism as an existential threat to democracy in the United States. And when Schmidt appeared on MSNBC's "Morning Joe" on January 15, he stressed that the U.S. is at a crossroads and must choose constitutional democracy over fascism and authoritarianism.

Schmidt's comments came at a time when millions of Americans are still in shock over the January 6 assault on the U.S. Capitol Building and Washington, D.C. is on high alert in the days leading up to the inauguration of President-elect Joe Biden — who Schmidt and others in the Lincoln Project, a right-wing Never Trump group, supported in 2020's presidential election. Schmidt praised Rep. Liz Cheney, a right-wing Republican and the daughter of former Vice President Dick Cheney, for supporting the impeachment of President Donald Trump and slammed House Minority Leader Kevin McCarthy as a coward for lacking the courage to thoroughly repudiate Trumpism.