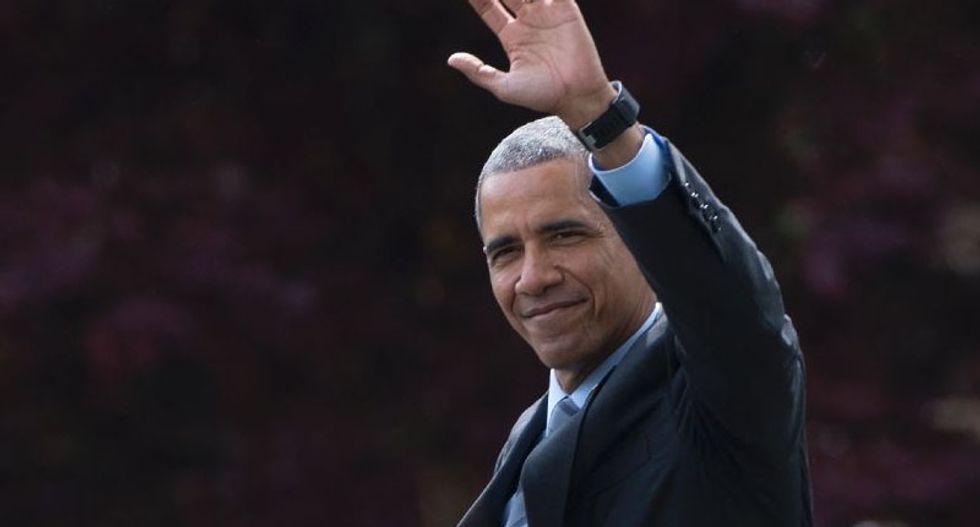 US President Barack Obama leaves the White House for a trip to Saudi Arabia, Germany and Britain on April 19, 2016 (AFP Photo/Molly Riley)

US President Barack Obama lands in Saudi Arabia on Wednesday to intensify the struggle against jihadists and efforts to end wars in Syria and Yemen, while trying to ease tensions with Riyadh.

After his early-afternoon arrival in the Saudi capital, Obama is to hold talks with King Salman, 80, who has presided over a more assertive foreign policy since acceding to the throne last year.

On Thursday, the president will attend a summit with the six Gulf Cooperation Council monarchies, joined by US Defence Secretary Ashton Carter and Secretary of State John Kerry.

They will gather in an atmosphere of bitterness with regional leaders offended by Obama's tone and actions, particularly what they see as his reluctance to get involved in Syria and other regional problems, as well as his tilt towards Iran.

The Sunni Gulf monarchies are worried after the lifting this year of international sanctions against their regional rival, Shiite Iran.

Riyadh and its neighbours fear the US-supported international deal to curb Iran's nuclear programme will embolden the country, which they accuse of interference throughout the Middle East.

Mustafa Alani, a senior adviser to the Gulf Research Center, said Obama's presidency has been "100 percent negative" for the region, a legacy of "keeping his distance".

But the White House has emphasised the strength of an alliance that has endured more than 70 years, seeking to minimise the frictions.

"There have always been complexities in the US-Saudi relationship. There's been a core to that relationship in which we cooperate on shared interests like counterterrorism," said Ben Rhodes, a close adviser to Obama, who is in the final months of his mandate.

Saudi-US ties are founded on an exchange of oil for security.

"The Saudis are frustrated. They have the impression, probably rightly so, that the White House does not really understand their concern of the Iranian threat", said Lori Plotkin Boghardt, of the Washington Institute for Near East Policy.

Saudis reacted with outrage to comments by Obama published in the April edition of US magazine The Atlantic.

He said the Saudis need to "share" the Middle East with their Iranian foes, saying that competition between Riyadh and Tehran has helped to feed proxy wars and chaos in Syria, Iraq and Yemen.

Obama spoke of "free riders", suggesting that certain states had not assumed their share of responsibility for regional security.

"I think the US has had long, longstanding concerns about the way the Saudis are behaving in the region. And this president has been more vocal than any about raising that", said Frederic Wehrey, of the Middle East Programme at the Carnegie Endowment for International Peace in Washington.

Also clouding this visit is congressional legislation that would potentially allow the Saudi government to be sued in American courts over the September 11, 2001 attacks on the United States.

Fifteen of the 19 hijackers were Saudi citizens but no official Saudi complicity in the Al-Qaeda attacks has been proven.

The kingdom has never been formally implicated.

Saudi Arabia has reportedly warned it could sell off several hundred billion dollars' worth of American assets if the bipartisan bill passes.

"If Saudi Arabia participated in terrorism, of course they should be able to be sued," Democratic Senator Chuck Schumer said.

On the eve of his departure from Washington, Obama stated his opposition to the bill.

He hopes the talks in Riyadh will concentrate on the fight against the Islamic State (IS) group of Sunni extremists, and how to end the conflicts in Syria and Yemen.

Saudi Arabia has assigned warplanes to a US-led coalition fighting IS in Syria.

Riyadh leads a separate Arab military coalition that for 13 months has supported Yemen's government in its battle against Iran-backed Shiite Huthi rebels.

The rights group Amnesty International asked Obama to place human rights at the centre of his discussions. It said opposition voices in the Gulf are systematically "stifled" under the cover of national security.