Older men -- not women or young people -- are afraid of using the bathroom with transgender people: poll 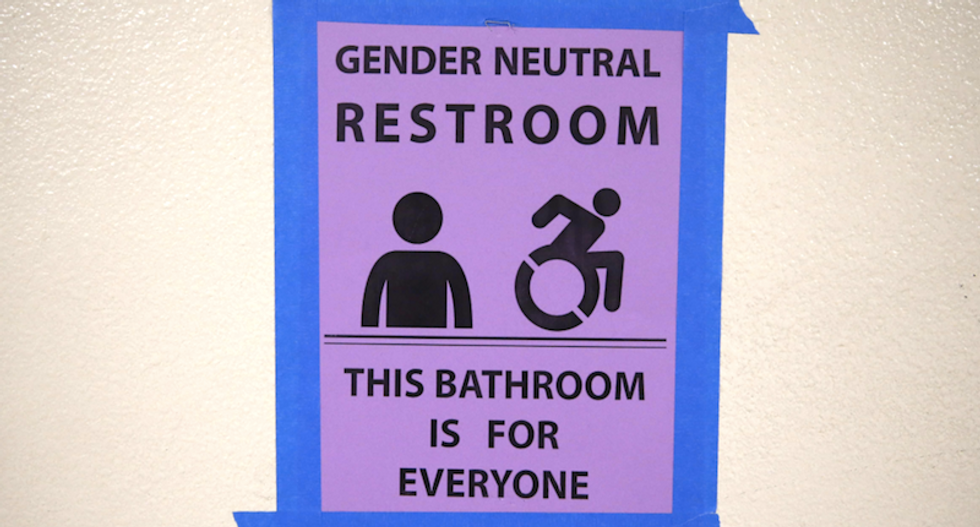 Transgender Americans may find greater acceptance in the future, according to a Reuters/Ipsos opinion poll that shows young adults and women more open to people using public bathrooms matching their gender identity.

The issue is polarizing much of the United States, notably in North Carolina, where big businesses and rock stars are boycotting the state over a new law requiring people to use the public restroom matching their birth certificate.

Americans aged 18 to 29 favor letting transgender people use the restroom of their identity by a 2-to-1 ratio. Among Americans aged 60 or more, the ratio was 2-to-1 in reverse with people saying restroom use should be mandated by the gender on one's birth certificate.

Forty-four percent of women favor letting a man who is in transition from male to female into their public toilets, compared to 39 percent who say they must use the facilities matching their gender assigned at birth.

"As long as they're not harming anyone, not harming children, and are dressed as male or female according to the bathroom where they are going, they have the same rights as everybody else," said Debbie Dellera, 65, a Republican and Donald Trump supporter from central New Jersey who participated in the poll.

Overall, the public is roughly split, with 43 percent saying they are closer to the view that people should use public restrooms "according to the biological sex on their birth certificate" compared to 41 percent who opt for "according to the gender with which they identify."

The results should be encouraging for advocates of transgender rights, who might also take heart from how rapidly public opinion shifted on the issue of same-sex marriage, said Paisley Currah, an author on transgender issues and a political science professor at Brooklyn College.

"Gender identity is a pretty new term for a lot of people so having effectively an even split on the bathroom question is a very good result," Currah said. "I was pleasantly surprised."

"The gay rights movement in the last few years moved very quickly and I feel like the transgender movement is moving at even greater speed."

The poll found 92 percent of respondents have heard of the term transgender, which refers to a range of people who do not conform to the sex assigned to them at birth, regardless of whether they have undergone any medical procedures toward gender reassignment.

Democrats, by 57 percent to 29 percent, and people in large metropolitan areas are more likely to allow transgender people to use the restroom corresponding to their gender identity. Republicans side with the birth certificate criteria by 64 percent to 23 percent.

New England and the Northeast were the regions most accepting of transgender people choosing restrooms by identity while the Southwest, Southeast and South were most inclined to side with the birth certificate standard.

People who frequently attend church are more than twice as likely to agree with the North Carolina law, although Roman Catholics are evenly split.

Support for transgender rights on the bathroom issues was strongest among those aged 18 to 29, who supported gender identity over birth certificate gender by 62 percent to 29 percent.

For those age 60 or older, 53 percent say transgender people should use the bathroom matching their birth certificate compared to 27 percent who sided with gender identity.

One of the respondents in that majority was Dale Garvey, 76, of Washington state, who raised concerns about "peeping Toms."

He also said he preferred the birth certificate standard in part based on an experience in the late 1980s when a co-worker was in transition from man to woman and made other women uncomfortable when he used their restroom.

"Quite seriously, sometimes we would get a rental car (for work) and people didn't want to ride with him. It gave us an uneasy feeling," Garvey said. "I guess I'm still somewhat biased and still back in the 1900s."