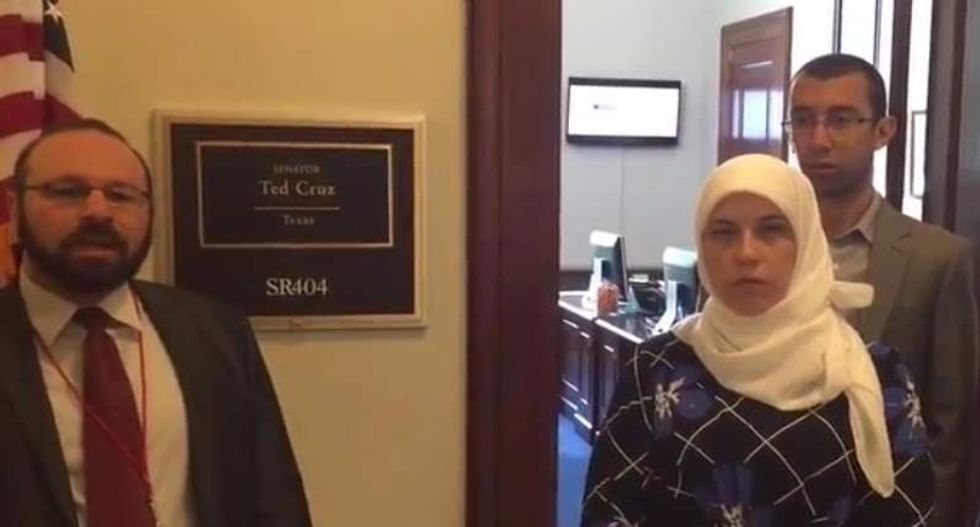 A group of activists accused Sen. Ted Cruz (R-TX) and his staff on Monday of ducking them during an event focusing on setting up meetings between Muslim communities and lawmakers.

The allegations were featured in a video posted on Monday by the Dallas-Fort Worth chapter of the Council of American-Islamic Relations (CAIR), which took part in Muslim Advocacy Day, organized by the US Council on Muslim Organizations, (USCMO) a coalition of 21 advocacy groups.

"This is the only office that has outright declined to meet with us, which is indicative of his behavior in the media as well," Alia Salem, a member of the Dallas group, says in the video.

Salem is joined in the video by Muslim American Society executive director Mazen Mokhtar, who said the group went to Cruz's office after no one responded to their requests for a meeting.

"Needless to say, we're disappointed, and we will continue to try to meet with our representatives, because our voice needs to be heard," Mokhtar says.

One of Cruz's foreign policy advisors, anti-Islam advocate Frank Gaffney, said the event was organized by groups "associated with Islamic supremacism" in an op-ed published in The Hill on Monday.

Gaffney, who has supported "birther" conspiracy theories concerning President Barack Obama, accused the USCMO of being "the latest in a long series of front organizations associated with, and working to advance, the agenda of the Muslim Brotherhood in the United States."

The council's secretary general, Oussama Jammal, condemned Gaffney's rhetoric in a separate interview with The Hill.

"It is unfortunate that this kind of Islamophobic rhetoric continues to run," Jammal said. "We are as American as anybody else, and this is our country, and we advocate for issues that are important for us."

Watch the video, as posted on Monday, below.