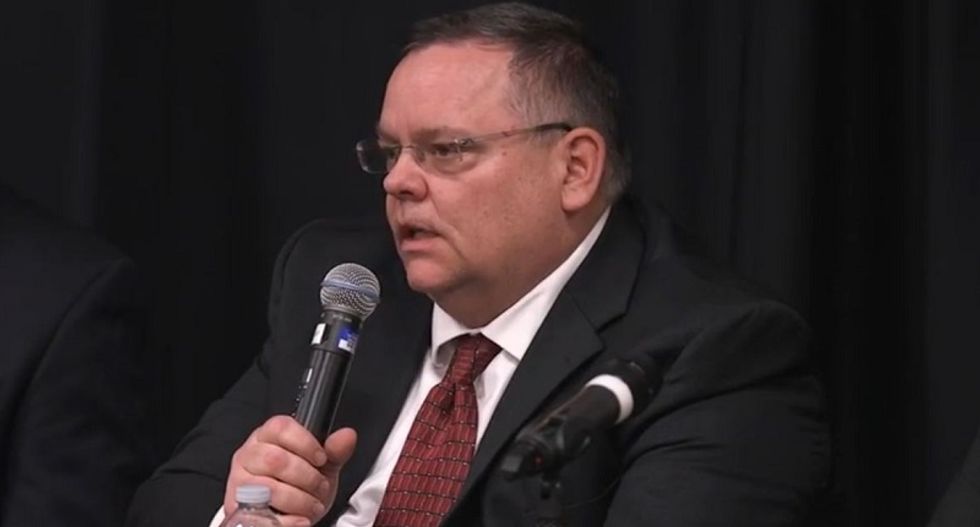 A Republican Senate candidate is being criticized for saying that Vietnamese refugees who came to Oregon "harvested" people's pets for food because "their lifestyle didn’t mix with ours," the Daily Caller reports.

Faye Stewart, a candidate for the U.S. Senate hailing from Oregon, made the comments during a GOP candidate forum on March 10 at George Fox University in Newberg, a town outside Portland.

"[W]e took in some refugees, I believe it was some Vietnamese refugees into this state years ago and it created a huge problem because their culture and their lifestyle didn’t mix with ours," he said.

Stewart said the refugees didn't know how to heat their home and set a fire in the middle of their apartment.

"Or, when they needed something to eat, they went to their natural ways of doing it by harvesting people's dogs and cats, their pets," Stewart added. "I question, why can't we go over there and help them, in their native land and protect them there. Why do we need to bring them here and potentially jeopardize the citizens' lives here?"

According to the Daily Caller, Stewart is currently a county commissioner in Lane County and is seeking the party nod to run against Democratic incumbent, Sen. Ron Wyden.

In regards to the comments, Stewart told Williamette Week that he got the information about the Vietnamese refugees "from a very close friend that lived in Portland that witnessed the items I referred to."

He made the reference as a point of concern over Syrian refugees currently seeking solace from brutal violence in their home country. Stewart told Williamette Week he believes his comments were taken out of context, but admits they may have created "division," saying,  "We can’t afford to create further division and hate in our communities, our state, and our country. It was bad enough that I made the statement that did just that but to have someone take my comments, edit them out of context, and use them to drive hate makes me sick."

Representatives from the local Vietnamese community fired back after being told about Stewart's remarks.

"We do not know where he gets the information about our community but that does not represent us as a whole," Lana Co, president of the Vietnamese Community of Oregon, told Williamette Week. "The Vietnamese community has made substantial contributions to the cultural, religious, political, and business life throughout the state of Oregon. He needs to take his comment back and he owes us an apology. He cannot represent us in the Senate."