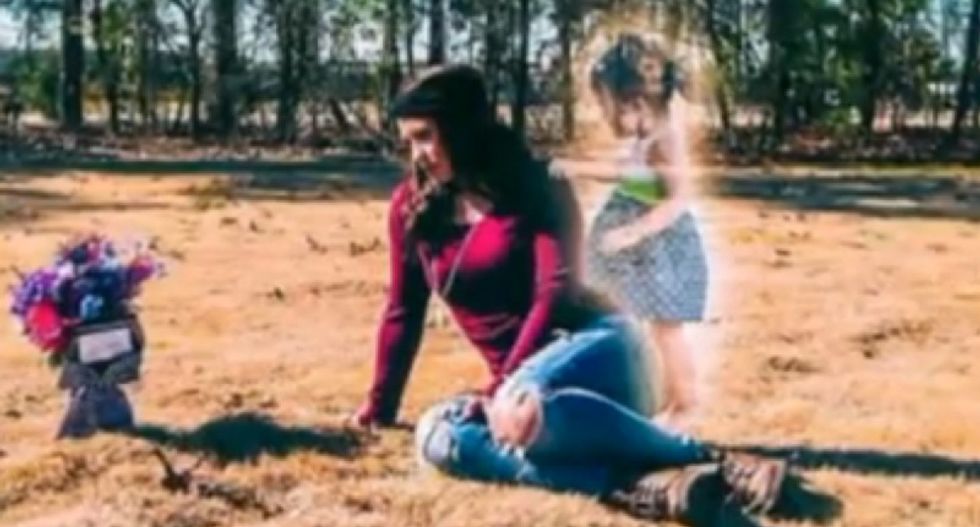 A Pennsylvania photographer who specializes in altering photographs of deceased people so that their ghosts appear to be accompanying their living loved ones is angry that a murder suspect bilked him into doing work for free.

Sunny Jo says Jeanie Ditty, who is accused of murdering her 2-year-old daughter Macy Grace, convinced him to do $500 of photography work for free because he felt sympathy for the mother's loss, WNCN reports.

“I felt so bad for the grieving mother that I decided to do $500 worth of work for free because of the situation,” Jo told the station.

But after Jo created images that included Ditty reading to the child's ghost and walking with the little girl, hand-in-hand, Ditty and her boyfriend, Zachary Keefer, were arrested and charged with first degree murder. Macy Grace died at a hospital in December with bruises on her body that authorities say were signs of serious abuse and neglect.

Ditty is an active-duty soldier at Fort Bragg, WNCN reports. Aside from murder, she and Keefer are charged with negligent child abuse inflicting serious bodily injury. The child was transported to a hospital on Dec. 2 and died two days later.

“I find out that she wanted these photos just to lie to the public, to cover up what she did so she can look like the grieving mother,” Jo said.

Watch a report from Pix11, here:

A Republican candidate for Phoenix City Council has now deleted tweets she wrote earlier in the month praising the pro-Trump rioters at the United States Capitol building as "patriots."

The Arizona Republic reports that GOP candidate Nicole Garcia on January 6th wrote tweets that gushed over the rioters who were assaulting the Capitol building in an attempt to overturn the results of the 2020 presidential election.

Writing for CNN Opinion this Monday, Kate Andersen Brower says that Melania Trump will be the only first lady in modern history to forgo the tradition of giving the incoming first lady a tour of the private living quarters on the second and third floors of the White House.

"...this tradition has long been one of the first lady's many unwritten obligations. And Melania Trump has discarded it," Brower writes.