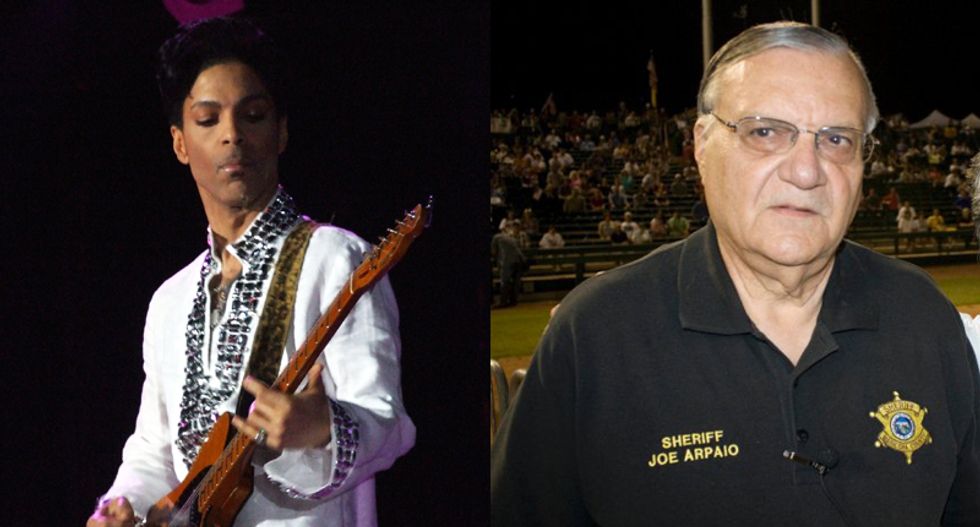 I will be the first to admit that I was pleasantly -- to say nothing of exceedingly -- surprised to see people behaving themselves on the Internet after it was announced that Prince Rogers Nelson tragically died on Thursday at the age of 57.

In year that has has already seen David Bowie, Maurice White and Merle Haggard -- innovators each and every one of them -- all die, the stunning news that Prince passed away was a real kick in the gut.

The reason for that is: Prince was awesome and he was too damn young to die.

Everybody loved Prince, and for one day it seemed like each and every person set aside their petty differences to join together and acknowledge his genius, his talent and his absolute originality that influenced -- and will continue to influence -- generations of artists and music fans.

I mean, holy shit, look at this from Minneapolis Thursday night:

This is what it sounds like when thousands of Prince faithful sing Purple Rain. @StarTribune pic.twitter.com/rqzs4qHPap

And look at this from around the world

For a brief moment in time, it was goddam refreshing to see folks reacting like human beings with a heart and a soul and everyone acting decently for once.

And then there was Maricopa County Sheriff Joe Arpaio who just had to go be a dick with this passive aggressive bullshit:

He then deleted it and put this up in its place:

Condolences to Prince family. He allegedly was treated for a drug overdose days ago. I celebrated 20 yrs of drug rehab in my jails today.
— Sheriff Joe Arpaio (@Sheriff Joe Arpaio)1461300440.0

I don't need to tell you that Sheriff Joe -- who calls himself "America's Toughest Sheriff" -- is a monstrous racist and sadist who, if there was any justice in the world, would be living in one of his own tents in 150 degree heat when he's not working on one of his chain gangs in the Arizona sun.

What makes his extreme dickishness so goddam awful is that it is highly unlikely he gives a damn about Prince -- with Sheriff Joe's Twitter account primarily used to promote himself and his goon squad.

So why did he do it? Simple, like I said: he's an asshole. He's always been an asshole and he'll always be an asshole. Combine that with his bigotry and you can see why he's a racist rock star in his own right for conservatives all across the country.

Needless to say, the good folks on Twitter let him know what they thought -- although many comments were lost after he deleted the original tweet.

@RealSheriffJoe you need to be buried up to your ears in a septic tank and pissed on forever you awful piece of garbage
— K. Thor Jensen (@K. Thor Jensen)1461292350.0

Let me just add to this:

Dude, next time just ... don't. Stay out of it. It's none of your business. Don't be a prick. Don't be a self-promoting dead-souled sociopathic racist dickbag with a God complex.

In other words, for a moment: don't be you. Asshole.