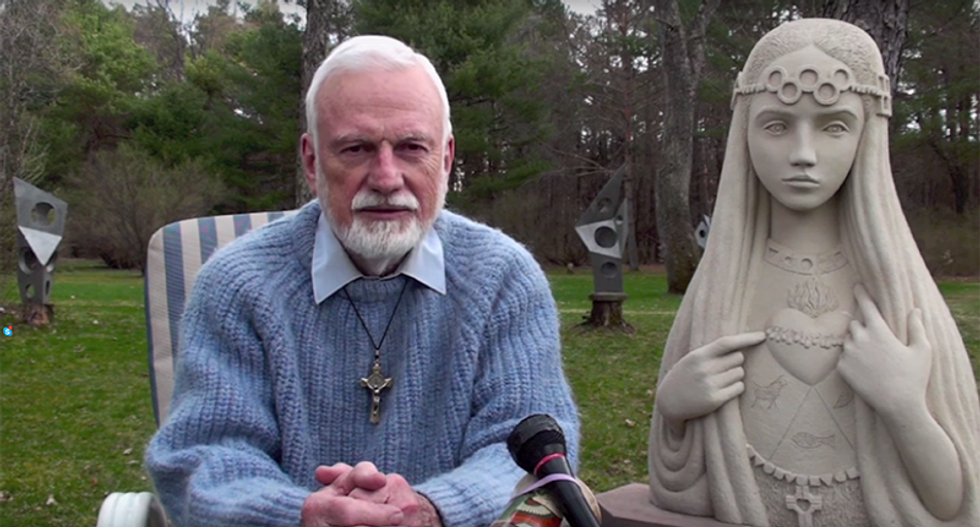 William Tapley calls himself the Third Eagle of the Apocalypse or the Co-prophet of the End Times. He's essentially a Biblical prophet of doom who claims to know all there is about the end of the world. You might also know him as the guy who wrote a poem about Obama's father and alleged that Obama is a secret homosexual.

This week, Tapley sat next to a stone sidekick as he revealed "the truth" about Prince's death: It's all part of God's plan for the end times. Reading a letter from a subscriber, Tapley references Daniel 8:11 which refers to the death of a prince having to do with a "Pope's recent abomination." Tapley is not a fan of Pope Francis.

Tapley says that the symbol that Prince used was a "perversion of the cross and is made up of the male and female form." He admits that he finds it hard to believe that "Almighty God" would use the death of Prince to verify Biblical prophecy, "and yet, that's exactly what He has done."

Tapley continued reading another letter from a subscriber who said that Prince sang about judgement day in "Party Like It's 1999, where he said the sky was purple and looked like purple rain. He wrote a song called 'Purple Rain.' He saw people dying everywhere. And he said, 'The voice said 2000, and it will all be gone.'"

"I can see where it is possible that he would represent the Prince of Peace and that would be Jesus Christ," Tapley continues before reading Daniel 8:11, which truly makes no sense in reference to the death of Prince. He concludes that the prophecy is fulfilled because Prince's death symbolizes taking away the Eucharist from the Prince of Peace (Jesus Christ). In the case of the scripture, however, it was the Anti-Christ that was taking away the daily sacrifice, which just fulfills even more of Tapley's interpretation of Revelations.

April 21, the day Prince died, also has some significance according to the "prophet." Two years ago on that same date, Pope Francis told a woman in Argentina "that even though she was divorced and remarried outside of the church [he] told her she could receive communion." This refers back to what Tapley calls a "Pope's recent abomination."

Thus, Prince's death signifies that the Apocalypse is upon us.

Despite never having "watched" any of Prince's music, Tapley does concede that the pop-star has a lot of "razzle-dazzle."