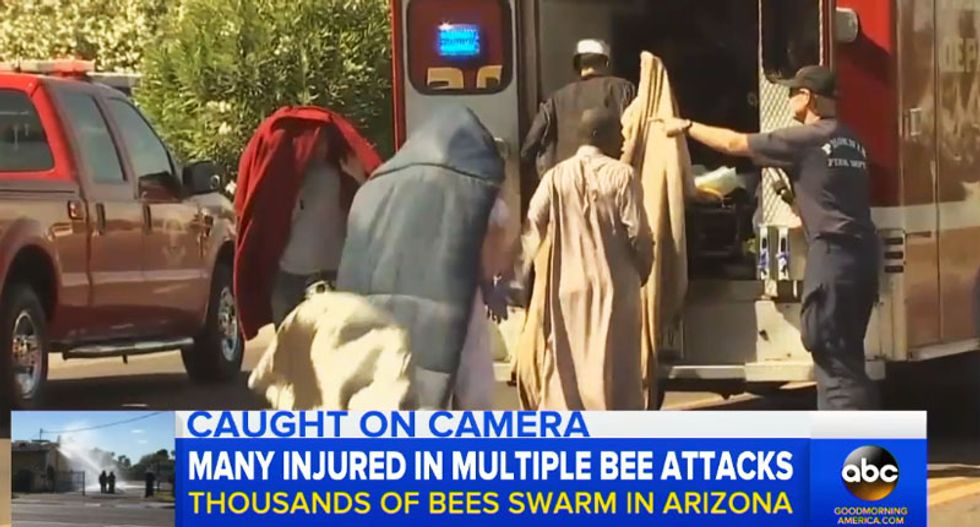 A Fox News report posted to Facebook about a swarm of bees that attacked a Phoenix-area mosque on Friday drew a swarm of its own -- racist commenters mocking the mosque-goers who were stung.

According to the Fox News Insider blog, the Muslim Community Mosque in Phoenix was overrun by bees stinging over 20 worshipers gathered in prayer and sending one to the hospital.

According to a spokeperson for the mosque a removal service had been scheduled to relocate the hive on Saturday.

Responding to the story on Facebook, Fox fans mocked the stung worshipers, with one commenting, "Bees are doing more for our national security than the president."

"A press statement from Obama was just issued. He apologized to the Muslims for Racist Bee Violence," wrote Dillon Reynolds.

Ronn Mason contributed, "Further investigation revealed that these Bees were reincarnated Muslim terrorists that killed themselves and found out the virgin thing was a lie!!!! So now they are seeking revenge..lol."

"Look for Ho'bama to call them republican or Christian bees and that attack on this mosque is worse than the murder of the 132 Parisians and all attacks on every 9/11 there have been," Terry Blanton suggested.

"This is what happens when you feed bees pork. Now, these Muslims have been injected with pork," wrote Erenie Shindall. "Wonder what the Imam will do to them. Plans are underway to release other pork fed bee swarms outside other mosques."

"I hope people don't USE bananas<-(hint) around mosques," said William Wermuth. "Hint-hint or the colors BLACK, RED or YELLOW because these attract bees. A swarm of Africanized bees descended on a mosque in Phoenix, Arizona on Friday. More than 20 people were stung, with one hurt so badly he had to be hospitalized. LMAO."

Thata Asio wrote: "God sorry I can't help myself from laughing while reading comments.. The queen bees are doing better job in containing ISIS in the mosque."

Others used the Bible to justify the attack.

"Exodus 8: 24 And the LORD did so; and there came a grievous swarm of flies into the house of Pharaoh, and into his servants houses, and into all the land of Egypt: the land was corrupted by reason of the swarm of flies," recalled Daniel Hillmer.

Billy Liljeroos showed off an extensive knowledge of the Bible writing, 'First mentioned in Deuteronomy 1:44 . Swarms of bees, and the danger of their attacks, are mentioned in Psalms 118:12 . Samson found a 'swarm of bees' in the carcass of a lion he had slain (Judg. 14:8 ). Wild bees are described as laying up honey in woods and in clefts of rocks ( Deuteronomy 32:13 ; Psalms 81:16 ). In Isaiah 7:18 the 'fly' and the 'bee' are personifications of the Egyptians and Assyrians, the inveterate enemies of Israel"

And Steven Hughes suggested that Islamic terrorism was to blame: "Are there any sort of bomb making materials out there which would attract bees and cause them to swarm?"