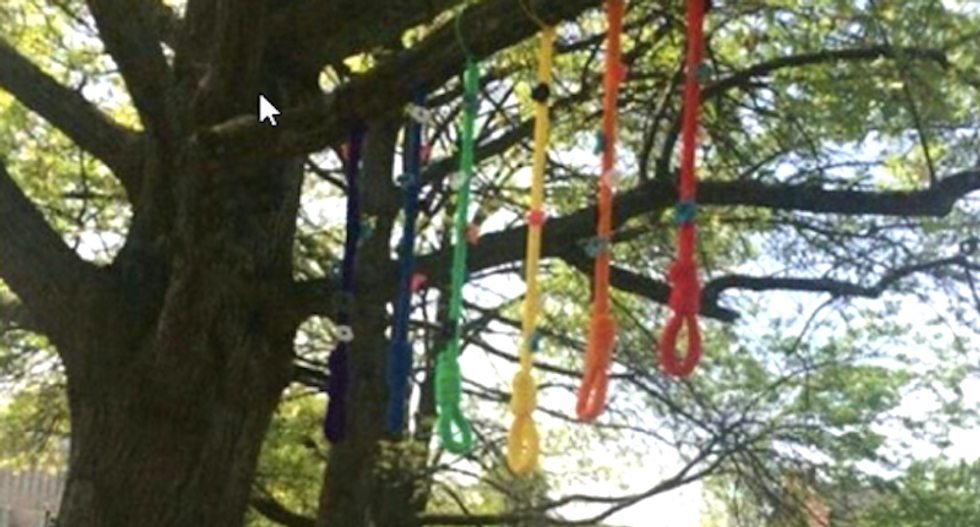 Police at Austin Peay State University in Tennessee have removed six rainbow colored nooses - widely seen as a symbol of racial hatred - hanging from a tree on campus, the school said.

Police on Monday took down the row of nooses found near the university fine arts building on the main campus in Clarksville, Tennessee, after receiving several complaints, the school said in a statement.

"This incident is deeply disturbing and is hurtful to our university community," said university president Alisa White. "I am saddened, and I am sorry for the hurt and offense this has caused."

The intent of the display, especially in the multicolored style suggesting a link to the gay pride movement, was unclear.

The noose is a symbol of racial hatred in the United States, where thousands of blacks were lynched in a dozen states including Tennessee between 1877 and 1950, according to a 2015 Equal Justice Initiative report.

High-profile police killings of unarmed black men in the last two years have triggered waves of protest and heightened awareness of racism and discrimination in the United States.

Speculation on social media suggested the display might be a student art project meant as to highlight the struggles facing the lesbian, gay, bisexual and transgender community with suicide, given that the nooses were the same colors found in the LGBT rainbow flag.

"Suicides in the LGBT community is an epidemic," one Facebook poster wrote. "You have the attention of the people, that is what art is about."

In March, a former University of Mississippi student pleaded guilty to a federal civil rights charge, admitting to his role in draping a noose around the neck of a statue of the school's first black student, according to the U.S. Justice Department.

Another ex-student admitted to a similar charge last year and was sentenced to six months in prison for the 2014 incident.

So this is at #APSU