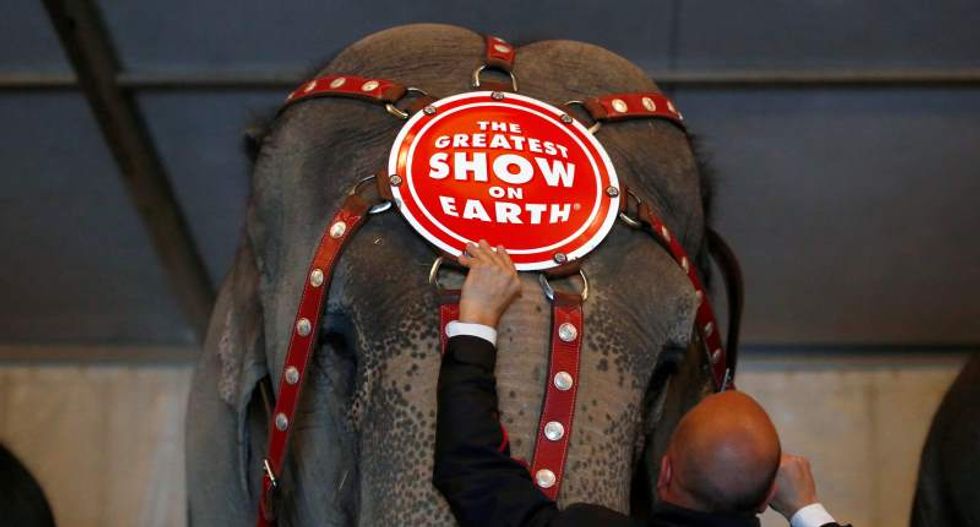 Senior Elephant Handler Ryan Henning attaches a headdress to an elephant in preparation for a performance at Ringling Bros and Barnum & Bailey Circus' "Circus Extreme" show at the Mohegan Sun Arena at Casey Plaza in Wilkes-Barre, Pennsylvania, on April 29, 2016. (Reuters/Andrew Kelly)

Elephants take a final bow at Ringling Bros and Barnum & Bailey Circus on Sunday, ending a 145-year spectacle that delighted fans but enraged animal activists, who say the highly publicized retirement is not enough.

The last 11 elephants touring with "The Greatest Show on Earth" will leave behind their enormous studded tiaras and begin traveling on Monday to Ringling's 200-acre (80-hectare) Center for Elephant Conservation in central Florida, said Stephen Payne, spokesman for the circus' parent company, Feld Entertainment.

Bonnie, Juliette and nine other female Asian elephants are retiring earlier than originally planned, reflecting shifting U.S. attitudes toward animal entertainment. SeaWorld Entertainment Inc is phasing out killer whale shows at its amusement parks, halting the breeding of orcas in captivity as of last month and replacing the extravaganzas with what it terms educational encounters by 2019.

But the United States has a long way to go, say animal activist groups including People for the Ethical Treatment of Animals, the International Fund for Animal Welfare and The Elephant Sanctuary.

Even after the Ringling elephants perform their last headstands in Sunday shows in Wilkes Barre, Pennsylvania and Providence, Rhode Island, a total of 69 elephants will still be in the possession of smaller U.S. circuses and traveling acts, with some too crippled to be exhibited and some kept for breeding, said PETA spokeswoman Katie Arth.

Other wild animals continue as circus headliners, including at Ringling Bros, which tours with 28 tigers, six lions, one leopard, two kangaroos and three pythons, Payne said.

At least 17 countries have outlawed circus acts featuring wild animals, but the practice remains largely legal in the United States. Hawaii is poised to be the first state to ban them and more than a dozen municipalities have enacted their own prohibitions.

While glad that the Ringling elephants are leaving their traveling days behind, animal activists are critical of the company's Polk City, Florida, facility that will serve as their retirement home.

"(It's) nothing more than a breeding facility, where elephants are chained for approximately 16 hours a day or more in concrete-floored barns and still beaten with bullhooks," PETA's Arth said. "When they're allowed outside, they're confined to small, virtually barren paddocks."

Payne brushed off the criticism as an effort by "animal rights extremists to score cheap publicity" and accused PETA of lacking first-hand knowledge of what it takes to care for an Asian elephant.

The center focuses on conservation, breeding and research, including studies to determine why elephants face a lower risk of cancer than humans despite their far greater body mass, the center's website says.

A Reuters reporter who toured the camp in October saw dozens of elephants corralled in groups of twos and threes in scrub-filled areas about the size of suburban back yards that gave them enough room to walk around and included toys. At night they stay in large barns, with their feet often chained to keep them from stealing each other's food.

"Free-range sanctuaries that are as large as possible are a much better option," said Katie Moore, animal rescue program director with the International Fund for Animal Welfare.

"Elephants actually do stand on their heads in the wild, I've seen it," Payne said.

Officials with the IFAW, PETA and The Elephant Sanctuary said it is more likely the elephants, which can weigh about 6,000 pounds (2,700 kg), will never again perform that circus shtick unless they are forced to do so.

"That is the most ridiculous thing I have heard in 30 years of knowing elephants in the wild," said Vivek Menon, senior advisor to the IFAW.