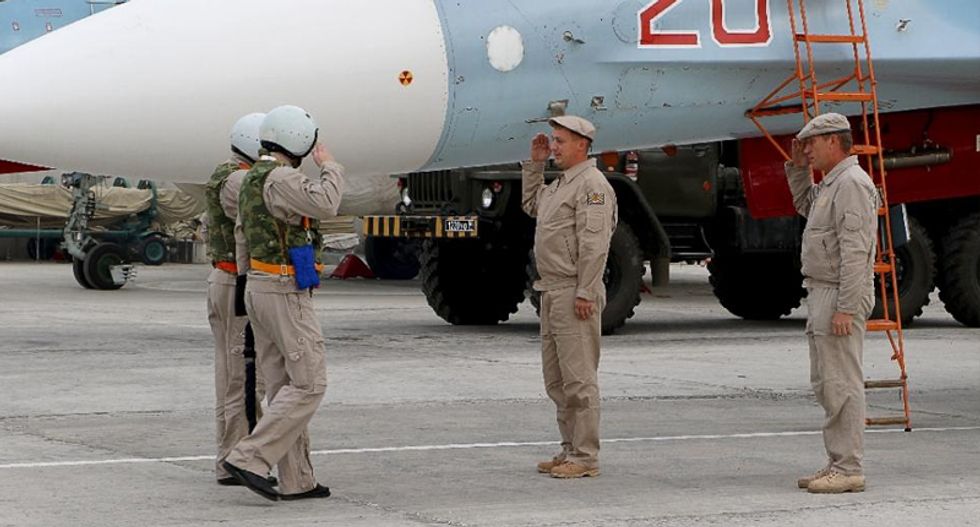 Russian servicemen salute as air force pilots arrive to board a Russian Sukhoi Su-30SM fighter jet before departure on a mission at the Russian Hmeimim military base in Latakia province, in the northwest of Syria, on December 16, 2015 (AFP Photo/Paul Gypteau)

Russia's defence ministry denied Sunday that a Russian jet that intercepted a US Air Force plane earlier this week had acted unsafely, dismissing the Pentagon's criticism.

The Pentagon said Saturday that a Russian SU-27 had flown in an "unsafe and unprofessional" manner while intercepting a US Air Force reconnaissance plane above the Baltic Sea on April 14.

"The entire flight of the Russian plane was conducted in strict compliance with international rules on the use of air space," defence ministry spokesman Igor Konashenkov said in a statement. "There were no emergency situations."

Moscow said the SU-27 had been dispatched to identify an "aerial target travelling toward the Russian border at high speed."

The aircraft detected by Russia was an American RC-135 plane, which the Pentagon said was conducting a routine flight.

When the RC-135 established visual contact with the Russian jet, the American plane "changed its flight route away from the Russian border," Konashenkov said.

Pentagon spokeswoman Laura Seal said Saturday that the US aircraft had "at no time crossed into Russian territory."

The incident came shortly after Russian aircraft repeatedly buzzed the USS Donald Cook this past week, including an incident Tuesday in which a Russian Su-24 flew 30 feet (nine meters) above the war ship in a "simulated attack profile," according to the US military's European Command.

US Secretary of State John Kerry condemned the warship flyby earlier this week, saying it was "dangerous" and could have lead to a shoot-down.

Russia said that it had observed all safety regulations in its flights.

Ties between Russia and the West have plunged to their post-Cold War nadir over Moscow's 2014 annexation of the Crimean peninsula from Kiev and its support for separatist rebels in eastern Ukraine.